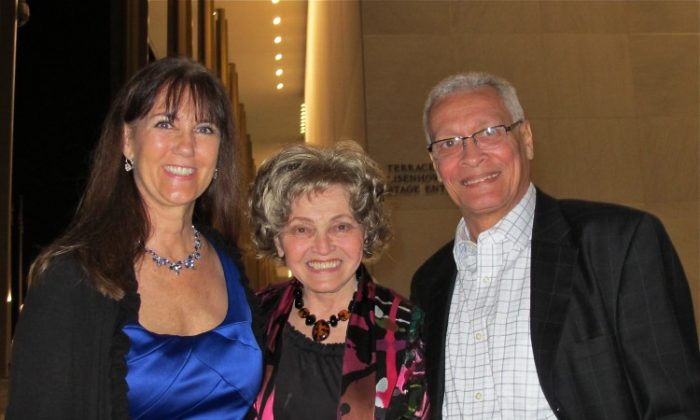 WASHINGTON—Mrs. Annette Lantos, foundation chair, former congressional staffer, human rights advocate, Holocaust survivor and widow of Representative Tom Lantos has been a patron of Shen Yun Performing Arts since it began in 2006. “We have been coming to Shen Yun every year since it began and, we have been sponsoring it in Congress and they are wonderful, really wonderful, extraordinary. This year was one of the really top performances and I’ve seen them, every one of them,” she said, after seeing the Shen Yun Touring Company at the Kennedy Center Opera House on March 21.

Mrs. Lantos brought a friend who is also a person of unusual achievement. Nancy Rivard founded and leads Airline Ambassadors, a non-profit organization which uses empty airline seats and cargo space to help people around the world. Airlines deliver food and supplies for free, and flight attendants escort people traveling to receive help and medical care. Airline Ambassadors developed a training to help flight attendants identify human trafficking and know how to respond.

Ms. Rivard said the performance was, “Inspirational, my first time, you know it was transcendent, the colors and the costumes and the expertise and the music. I loved it.”

Shen Yun, based in New York, includes stories of contemporary history in China. As the description of the first dance An Era Begins says, “a contest of good and evil is about to ensue in the human world.” The dance called The Choice portrays Falun Dafa followers protesting on Tiananmen Square, and their courage, according to the program.

Mrs. Rivard said she wanted to learn more about the persecution of Falun Dafa in China, in order to stop it. “I want to learn more about it so I can help stop it and bring attention to this issue because these people clearly bring great upliftment to humanity and there is nothing wrong with what they’re doing, I mean, it doesn’t persecute anybody, it’s only goodness, pure goodness, it seems to me.”

Mrs. Lantos chairs the Lantos Foundation. It was “established to perpetuate Tom Lantos’ proud legacy as an ardent champion for human rights by carrying, in his words, “the noble banner of human rights to every corner of the world,” according to its mission statement. Rep. Lantos, also a Holocaust survivor, founded the bipartisan congressional Tom Lantos Human Rights Commission, which is meant to “promote, defend and advocate internationally recognized human rights norms in a nonpartisan manner, both within and outside of Congress, as enshrined in the Universal Declaration of Human Rights,” according to its mission statement.

An animal lover, as was her late husband, Mrs. Lantos has worked to help animals as well as people. The Tom and Annette Lantos Center for Compassion is a new Humane Society & SPCA shelter in Burlingame, California, which is “Warm. Inspiring. Bright. Creative. Fun,” according to its visitors’ log, quoted on its website.