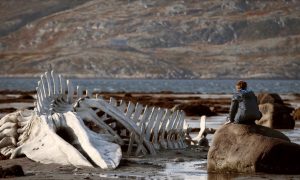 How to Play a Master Painter? Learn to Paint

NEW YORK—Talk about suffering for your art. Achieving his acclaimed performance as the masterful British landscape painter J.M.W. Turner in “Mr. Turner” took so much out of Timothy Spall, the veteran actor found himself kneeling down at the artist’s tomb in St. Paul’s Cathedral when it was all over—and crying.

And I realized my job was to look at this massive explosion of genius and implode it all back in, right back to where it started.
— Timothy Spall

Working with the famously exacting director Mike Leigh, as he has a number of times, Spall was tasked with what he called detective work, delving deep into Turner’s art to ferret out Turner the man. The artist died in 1851—”pre-psychoanalysis,” Spall notes. “And he never really explained himself. He didn’t want anybody to really know what he was up to.”

This meant that Spall, aside from reading everything he could get his hands on, had to learn to paint himself.

“Mike said, ‘Are you up for it? And I said, ‘All right, if this is what it’s gonna take,” Spall recalled. “And we just went and looked at these paintings, and I kept saying, ‘What IS that?’ And I realized my job was to look at this massive explosion of genius and implode it all back in, right back to where it started.”

So Spall studied—still life, real life, drawing in all its forms, even Greek and Roman architecture. “I even started reading about Goethe’s theory of light,” he said.

Often, films about famous artists have portrayed them as rarified geniuses. “Mr. Turner” is different—the movie, which has earned raves for both Leigh and Spall, depicts an unassuming son of a barber who simply worked and worked, all the time. Indeed, Turner produced a staggering 20,000 works on paper, and more than 300 oil paintings.

“How did he do that? Well, he just never stopped,” Leigh said. “He was just at it all the time. I mean it’s a phenomenal amount of stuff. This is a guy who just does it, and what he does is extraordinary. And HOW he does it remains a mystery.”

The film was somewhat of a departure for Leigh, one of Britain’s most admired directors, who is known mostly for gritty contemporary films about working-class characters. But he said that once he made the 1999 “Topsy-Turvy” about Gilbert and Sullivan, he realized he was “over the idea that I was only ever going to make contemporary films.”

“I started to look into Turner having known the paintings, ” the director said, “and once I started to investigate Turner the character, I thought, this world is absolutely meant to be dramatized.” Turner was a man, for example, who had himself tied to the mast of a ship during a huge storm, in order to better understand the force of nature at sea—a scene recreated in “Mr. Turner.”

Spall and Leigh formulated the character over two years of study, and six months of rehearsal. Oh, and three trips by Spall to Turner’s grave.

“First, when Mike asked me (to do the film), I went down there and pretended to tie my shoes, knelt by his grave and just had a quick word. I said, ‘Look, for what I’m about to do, please forgive me! And help me if you can.'”

A second trip came halfway through filming. “I went back and said, ‘Look, I don’t know if this is going the way you’d like!’ Again pretending to tie my shoes.”

The third trip came when he’d finished the film. This was when he wept. “This time I didn’t even bother to pretend to tie my shoes,” he said.

“I’m … I’m just flabbergasted,” he said, having gotten the news moments before this interview. “My gast is absolutely flabbered! I suppose what’s lovely about it is that I’ve been around a bit, and you get plenty of kicks up the arse, you know? So it’s nice to get flowers every now and again.”

Spall is considered a contender—but perhaps an outside shot, in a very crowded field—for an Oscar nomination. But he’s just happy that all the recognition means more people are seeing the film—and Turner’s paintings, too, currently on display in an exhibit of the artist’s late work at the Tate Gallery in London.

“It seems that Turner’s working his magic at the moment,” the actor said.