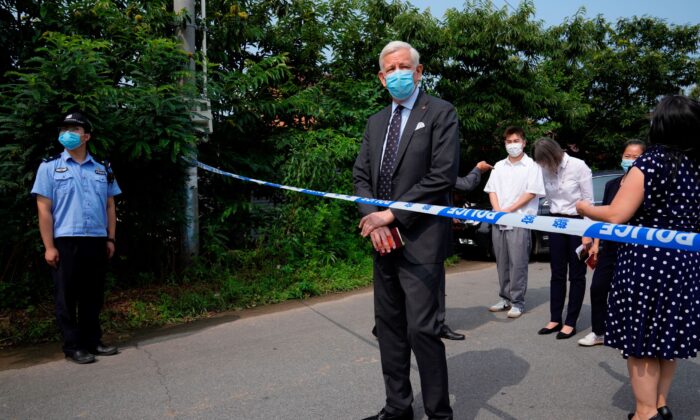 Then ambassador to China Dominic Barton stands near a barricade tape in August 2021 as he arrives at a detention centre to meet Canadian Michael Spavor, who was arbitrarily detained in Dandong, China. (AP Photo/Ng Han Guan)
Canada

Canada’s former ambassador to China recently accepted a top appointment with a mining giant which does over half of its sales in China. Now, two MPs are asking the Ethics Commissioner to probe the issue to determine if any conflict of interest rules were broken.

NDP MPs Heather McPherson and Matthew Green wrote a letter to commissioner Mario Dion highlighting areas of concern such as the string of events ahead of ex-ambassador Dominic Barton’s new appointment. McPherson is NDP critic for foreign affairs and Green is the ethics critic.

Barton met with executives from the Anglo-Australian mining company Rio Tinto in October 2021, according to a Globe and Mail article published last month. Barton announced on Dec. 6 he would be stepping down from his Beijing post by year end.

Rio Tinto announced Barton was appointed chair of the company on Dec. 19, saying he would join the board in April and become chair in May.

“Given that Mr. Barton held a position within public office at a high level of responsibility and influence and, given that Mr. Barton met with Rio Tinto executives as recently as October 2021, it should be of concern to all Canadians that less than three months after meeting with the gold mining company, he announced his intention to become Chair of Rio Tinto’s Board of Directors,” says the letter authored by McPherson and Green, according to the Globe.

The letter notes that conflict of interest legislation is in place to protect Canadians from officials in positions of power “unethically leveraging their public service to unfairly benefit themselves or their family, either financially or through greater influence and position.”

The Treasury Board’s Directive on Conflict of Interest states that public servants need to seek approval with a senior manager if accepting an appointment to a board of directors of outside entities with which they had significant official dealings in the year immediately prior to leaving their employment in the public service.

“It is our understanding that this was taken into account before Mr. Barton accepted his new appointment with Rio Tinto,” GAC said, adding that any request concerning his post-employment should be addressed to the Ethics Commissioner.

John Brassard, the Conservative critic for ethics and accountable government, said his party is looking into the issue.

“Canada’s Ambassador knows the rules of conduct, he knows the Conflict of Interest Act. He should be adhering to them, and we will find out whether, in fact, that was the case with Rio Tinto,” Brassard said at a press conference about a separate matter on Jan. 10.

Barton was appointed ambassador to China in September 2019; at that time he was the chairman of Canadian natural resources company Teck Resources. He had previously worked at McKinsey and Company for decades, a management consulting firm that included Chinese state-owned enterprises among its clients, some of which have built militarized artificial islands in the Pacific in contravention of international law. Barton was global managing partner of the firm from 2009 to 2018.

Barton is taking over for Rio Tinto chairman Simon Thompson who stepped down amid a scandal involving the destruction of the 46,000-year-old Juukan Gorge aboriginal sacred rock shelter in Australia in 2020.

Barton said in a Rio Tinto press release that he is excited to join the company as it “navigates a shifting competitive landscape and seeks to emerge as a leader in the climate transition.”

Rio Tinto chief executive Jakob Stausholm said in the statement he is looking forward to working with Barton to “strengthen Rio Tinto, in particular drawing on his wealth of experience across Asia in both a business and diplomatic capacity.”

China counts for 60 percent of Rio Tinto’s total sales according to the company’s latest results, which is fuelled by the communist-led country’s need for iron ore for steelmaking.

Editor’s note: This article was updated to include remarks from Global Affairs Canada.