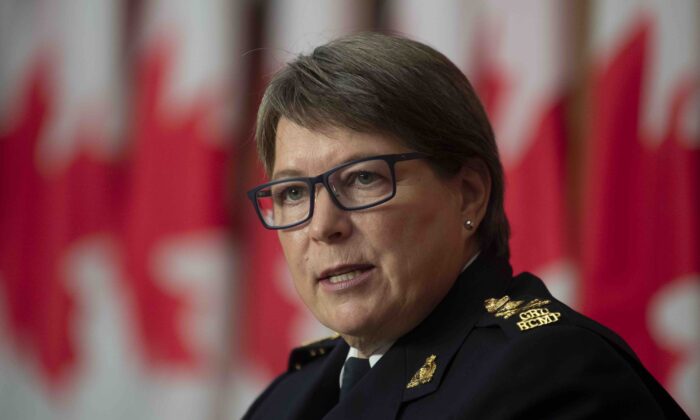 OTTAWA—MPs on the House of Commons public safety committee meet Monday to explore whether there was political meddling with the RCMP as it investigated the April 2020 shootings in Nova Scotia.

Just over a week after a gunman murdered 22 people during a 13−hour shooting spree, RCMP Commissioner Brenda Lucki held a meeting with top officers in Nova Scotia that has been described by those in attendance as tense.

Supt. Darren Campbell, who was in charge of the investigation, wrote in his notes that Lucki mentioned promising the federal government to release information about the weapons the gunman used.

Lia Scanlan, an RCMP communication director, also told the public inquiry looking into the shootings that then−public safety minister Bill Blair and Prime Minister Justin Trudeau were “weighing in on what we could and couldn’t say,” although she did not elaborate on what that meant.

Trudeau and Blair have adamantly denied there was any political interference and Lucki has repeatedly said she did not feel any pressure from federal officials.

The committee will hear from Lucki along with other senior RCMP members at national headquarters, senior officers from the Nova Scotia Mounties, Blair and deputy public safety minister Rob Stewart.

The witness list does not include Scanlan or Campbell, who is scheduled to appear before the public inquiry looking into the shootings in Halifax the same day.

Campbell’s notes outline that the meeting with Lucki and several others from the RCMP’s national headquarters came as a surprise to him.

“I felt that the press briefing was honest and forthcoming and that we were able to safeguard information to protect the integrity of the ongoing investigation,” he wrote.

It’s not clear when the notes were written, although they reference the meeting as being in the past.

Campbell wrote that Lucki was “obviously upset,” although she didn’t raise her voice. He said Lucki accused him of disrespecting her by not following instructions, and that this confused him.

He believed revealing information about the guns used in the killings would jeopardize the investigation both in Canada and the United States. Gunman Gabriel Wortman smuggled a number of handguns and assault−style weapons from Maine, including one given to him by a friend. No one in either country has been charged with weapons offences in the case.

“The commissioner said that she had promised the minister of public safety and the Prime Minister’s Office that the RCMP (we) would release this information,” Campbell’s notes read.

“The commissioner then said that we didn’t understand, that this was tied to pending gun control legislation that would make officers and public safer.”

On May 1, 2020, the federal government announced it was fulfilling an election promise by banning 1,500 types of assault−style rifles. During the announcement, Trudeau referenced the Nova Scotia shooting as an example of what the changes were meant to prevent.

Blair was asked at the same press conference whether the list included the type of weapons used by Wortman, and he confirmed some were, although he did not give specifics. Since the allegations, he has said he discussed the investigation into the shootings and the gun control measures with Lucki, but that those discussions were separate.

The RCMP also did not release information about the weapons to the public. Media outlets, including The Canadian Press, were arguing in court at the time to see that information, which was blacked out in police documents used to obtain search warrants in the case. The information was eventually released through access−to−information legislation in November.

Campbell’s handwritten notes have been published as part of the ongoing public inquiry into the shootings. They were attached as an exhibit to a scathing document outlining dozens of instances in which the RCMP concealed or obfuscated basic information about the case in the three months following the shootings.

That includes the number of victims, their relationship to the gunman, the fact that one victim was a child, the number of crime scenes, the reason for the first 911 call the night the killings began, and when police learned the gunman was disguised as an RCMP officer, among other things.

Campbell and Chief Supt. Chris Leather were the main spokespeople for the RCMP during six public briefings held between April 19 and June 4, 2020.