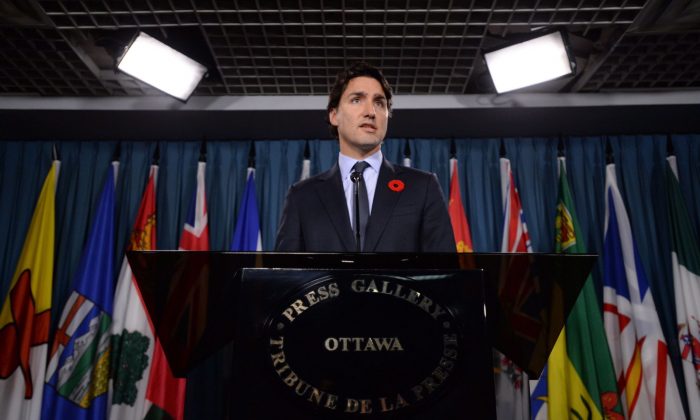 Liberal Leader Justin Trudeau speaks at a news conference on Parliament Hill Nov. 5, 2014 regarding accusations of personal misconduct made by two female members of the NDP against two Liberal MPs. A committee of MPs has been tasked with confronting the fact that there is no sexual harassment protocol covering parliamentarians and those who work in their offices. (The Canadian Press/Sean Kilpatrick)
Canada

MPs Approved Harassment Policy in 2001, It Just Didn’t Cover Themselves

OTTAWA—A closed-door committee of MPs approved a harassment policy for House of Commons employees 13 years ago, but has yet to create one that would specifically apply to politicians and their office staff.

The committee known as the board of internal economy is the same secretive, multi-partisan body that’s looking into allegations of personal misconduct levelled against two Liberal MPs by two of their NDP counterparts.

The board has been tasked with confronting the fact that there is no sexual harassment protocol that covers parliamentarians and the people who work in their offices.

The NDP’s Parliament Hill employees are unionized and covered by a collective agreement and complaint mechanism. The Commons administration, meanwhile, has a “Prevention and Resolution of Harassment in the Workplace” policy, approved by MPs in 2001.

The Clerk of the House of Commons, Audrey O’Brien, noted the lack of a policy for the political side during a Status of Women Committee hearing in 2012.

“I think all of the parties and all of the whips are very anxious to avoid these kinds of situations, but I don’t think any of them view us, the administration, as part of a solution to that,” O’Brien said.

That same Status of Women committee recommended in 2013 that the government work with Parliament to consider ways of addressing sexual harassment. Parliament’s response a few months later: it’s not “within the purview of ministers to address.”

The issue of how to deal with workplace harassment complaints landed in the spotlight last week when Liberal Leader Justin Trudeau suspended MPs Scott Andrews and Massimo Pacetti from the Liberal caucus.

Both have maintained they did nothing wrong.

The two New Democrat MPs at the heart of the controversy have so far not been named, nor has the nature of their allegations been made public.

“I think I can speak for the three parties when I say we’d all like to see a policy in place that can help MP-to-MP issues or concerns,” Conservative MP Susan Truppe, parliamentary secretary to the status of women minister, told CBC’s Power and Politics last week.

The House of Commons administration’s procedures could very well serve as a model for MPs when drafting their own policy.

For one, the House of Commons urges employees who face harassment to use an informal process called the “Finding Solutions Together” program before they lodge a formal complaint.

“One of the things that happens in a lot of cases—and one of the reasons I think our informal conflict resolution process works well—is that if you can get conflicts at a point before they have hardened into positions and everybody has a stake in winning, you have a much better likelihood of people coming to a resolution,” O’Brien said.

Whether they use the mediation program or lodge a complaint, the identities of the alleged victims and alleged harassers are kept confidential throughout.

The House of Commons administration’s definition of sexual harassment includes demands for sexual favours or sexual assault; inappropriate or unwanted physical contact, insulting comments, gestures and practical jokes of a sexual nature; and inappropriate inquiries or comments about an individual’s sex life.

O’Brien noted that only one complaint had been filed since 2006 and was deemed to be unfounded. She told the Commons committee that in the highly charged Parliament Hill environment, it’s important to determine what exactly the complaints are about.

“We realize that once an allegation is made you can’t unring the bell,” she said.

“Very often what happens is people are sufficiently upset and they may not know how to articulate what they’re upset about.”