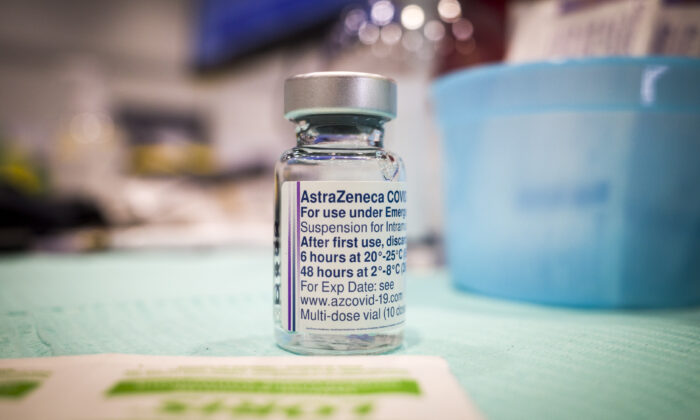 A vial of AstraZeneca vaccine is seen at a mass COVID-19 vaccination clinic in Calgary, Alta., on April 22, 2021. (The Canadian Press/Jeff McIntosh)
Canada

A Conservative MP says the president of the Canadian arm of AstraZeneca couldn’t answer questions at a parliamentary committee as to why the company asked for clauses to be shielded from liability for vaccine-related injuries.

“‘Indemnification clauses’ protect manufacturers of #vaccines from liability. Today at the Foreign Affairs Committee the President of @AstraZenecaCA could not answer basic questions about why indemnification clauses were asked for and how they apply,” MP Garnett Genuis said in a tweet on April 25.

In his social media post, Genuis shared a video of his exchange with the president of AstraZeneca Canada, Kiersten Combs, who appeared before the committee as it studied issues surrounding vaccine equity and intellectual property rights.

“Indemnification clauses” protect manufacturers of #vaccines from liability. Today at the Foreign Affairs Committee the President of @AstraZenecaCA could not answer basic questions about why indemnification clauses were asked for and how they apply. #cdnpoli #COVID19 pic.twitter.com/VO0xIi3a6i

Combs was asked to explain why her company asked for indemnification clauses, and if the related liabilities and clauses would still apply if her company had withheld information in cases when injuries were caused by their vaccines.

In his questioning, Genuis referred to previous testimony the same day from Seth Berkley, chief executive officer at Gavi, The Vaccine Alliance, who told the committee that the global distribution of vaccines are subject to indemnification clauses that receiving countries have to sign on to, which shields the companies from liability in the event of vaccine injuries.

“This witness further told us that [industry representatives] had asked for this protection as part of your agreements,” Genuis said. “So could you please explain why your company asked for indemnification clauses?”

“I’m not privileged as to specifically the indemnification clause in the contract that you speak of,” Combs answered.

“What I can say is that AstraZeneca stands behind our medicines and the safety profile of our medicines,” she added.

Genuis then interjected, asking Combs how she could not be aware of the details of the indemnification clauses in her position as Canadian president of the company, and repeated the question on why the clause was requested.

“I think that indemnification clauses—in all of my time in the pharmaceutical industry—is standard part of contracting. The specific details in which you talk about, I just am not … I don’t have the knowledge to answer,” Combs said in response.

In December 2020, Canada introduced the no-fault Vaccine Injury Support Program to all Health Canada-approved vaccines, including those manufactured by AstraZeneca.

The term “no-fault,” means that “financial support to eligible claimants is provided regardless of responsibility or possible fault (e.g., of the claimant, manufacturer, or health professional administering the vaccine),” according to the program’s website.

During the April 25 committee meeting, Genuis asked Berkley how the Canadian government applies the indemnification clauses it has signed around claims that might be made against vaccine manufacturers.

Berkley told the committee that during the pandemic, his organization has helped set up the “standardized indemnification liability agreement”—a new mechanism agreed upon by all vaccine manufacturers that indemnifies them against any losses they may incur from the deployment and use of their vaccines in countries participating in the COVAX (COVID-19 Vaccines Global Access) facilities.

Gavi, a Switzerland-based organization focused on increasing access to vaccines in poor countries, has also established a no-fault compensation scheme that allows countries to receive a certain amount of financing, funded by a certain price on each dose of vaccine that is part of the COVAX facility, in the case of severe disease or death from vaccine-related effects, Berkley said.

While he did not provide a number on the amount of money paid out from that no-fault compensation fund, Berkley said that “there have not been a lot of claims on that account.”

He also confirmed that the funding for the no-fault compensation mechanism comes from donors to COVAX, rather than from the vaccine industry, and that no mechanisms currently exist for the industry to do so.

“There currently is no mechanism,” he said. “Of course, normally industry does pay its own insurance costs for self-insurers against AEFIs [adverse events following immunization]. But in the case of novel vaccines, and during a pandemic, they weren’t willing to do that,” he said.

“It is events that are severe in nature, that are proposed to be related to the vaccine,” Berkley said, adding that the mechanism is run by a commercial insurance operation and is managed by them “in a way that allows a specific set of responses, and therefore specific payments” for severe side effects and deaths.

When asked if it indemnifies companies if a company had certain information about the vaccines’ side effects, but withheld that information, Berkley said it was “not the purpose” of this mechanism to provide blanket protection to industry.

“It was to make sure that if there were … severe reactions to the vaccine, unknown reactions, that there would be a compensation mechanism set up,” he said.