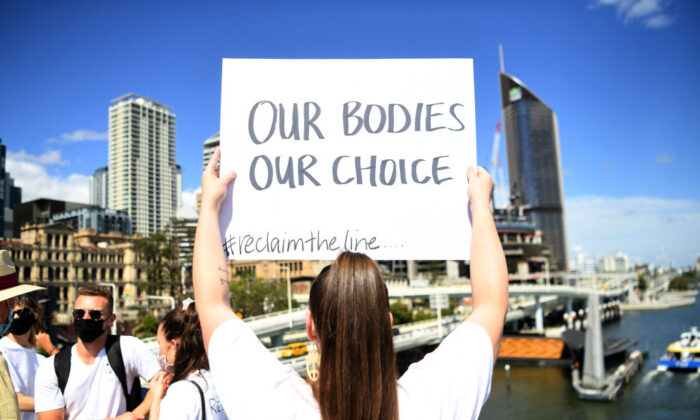 Protesters march across Victoria Bridge during a rally against a mandatory COVID-19 vaccine in Brisbane, Australia on Oct. 01, 2021 (Dan Peled/Getty Images)
Australia

A member of Parliament in the Australian state of Queensland has received over 2,000 inquiries in the last two weeks, including from nurses, miners, and even police officers, reaching out with concerns over mandatory vaccination policies.

George Christensen, the federal member for Dawson and fierce critic of mandatory vaccination, said his office received inquiries from individuals who said they could end up vacating their roles because of “no jab, no job” policies.

“I’ve had a few queries from the construction sector, but also within the public sector. I’ve personally had police officers in New South Wales contact my electorate, saying disciplinary action is going to be taken against them, as well as subsequent suspensions. I’ve had nurses contact me who are likely to be escorted off Queensland Health premises on Friday (Oct. 1),” he told The Epoch Times.

“I have had mineworkers who have expressed concerns that some of the large corporations are hinting that they are going to have mandatory vaccination requirements for their workers,” he added.

“A lot of these people feel like they’ve been left in the lurch because their unions aren’t standing up for them and have latched onto the zeitgeist that getting vaccinated is for the greater good.”

However, he noted that there were unions fighting for workers who were reluctant to get vaccinated including the Nurses Professional Association of Queensland, as well as certain transport, teaching, and medical unions.

Christensen has received hefty criticism for taking a tough stance against mandatory vaccinations and other public health restrictions, particularly on social media platforms like Telegram.

Fellow Nationals Party member of Parliament Darren Chester, who recently decided to “take a break” from politics, including opting out of party room meetings, said he believed party leaders were not doing enough to rein in outspoken MPs like Christensen and Senator Matt Canavan.

“My decision follows months of frustration with the repeated failure of the leadership to even attempt to moderate some of the more disrespectful and offensive views expressed by a minority of colleagues,” he said in a statement on Twitter.

Nationals leader Barnaby Joyce said he did not plan to “muzzle George Christensen,” saying he was a free individual and could say “what he likes.”

In July, the National Cabinet—comprised of state and territory leaders—agreed on a national roadmap to begin easing health restrictions across the country. However, opening the country is predicated on each jurisdiction vaccinating most of its population.

This has spurred state leaders in New South Wales and Victoria and business leaders to encourage vaccination rates.

However, the move has left individuals reluctant to take the vaccine—some with genuine health concerns—facing the prospect of unemployment.

As a result, the NSW government is currently battling several lawsuits simultaneously regarding vaccine mandates and health restrictions.