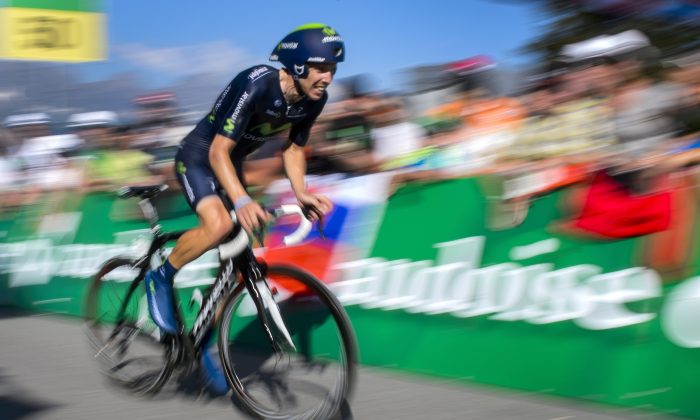 Movistar's Rui Costa rides on his way to winning the final stage and the General Classification of the Tour de Suisse, on June 16, 2013. It was Costa’s second successive Tour de Suisse victory. (Fabrice Coffrini/AFP/Getty Images)
Cycling

Defending champion Rui Costa won both the final stage and the General Classification of the 2013 Tour de Suisse Sunday with a powerful showing in the difficult uphill-finish time trial. The Movistar rider won the stage by 21 seconds and the overall race by a minute.

“It’s great to win. This was an important stage and it was great to have a chance to win again,” Costa told Cyclingnews.com.

“To win the Tour de Suisse once is good, to win it twice is even better and I won two stages too. It’s nice to see so many fans here too.”

The Tour de Suisse is the alternative tune-up race for teams heading for the Tour de France. Less hilly and thus less demanding that the Critérium du Dauphiné, the Tour de Suisse is a week later, so form honed in this race is more likely to last until the Tour starts in two weeks—though of course there is less recovery time, too.

Stage Two had to be shortened due to snow on the Nufenenpass. The resulting 117-km route offered no challenges until the Cat One summit finish at Crans Montana, ensuring a good fight on that climb.

A four rider break was caught 17 km from the finish, just as the climbing started. The catch led to a flurry of attacks, with Ryder Hesjedal making the strongest. The Garmin-Sharp rider was soon joined by Jesus Herrada (Movistar), Tanel Kangert (Astana), Dan Martin (Garmin,) and Brice Feillu (Vacansoliel.) Only the Astana rider could math Hesjedal’s pace, and the Garmin rider managed to drop him five km from the line, where the hill was steepest.

Hesjedal couldn’t hold out. Blanco’s Bauke Mollema caught him 200 meters from the finish line, with a group of riders including BMC’s Mathias Frank only a few seconds behind. Mollema took the stage; Cam Meyer kept yellow by three seconds over Hesjedal and five over Frank.

Stage Three was long and lumpy with a cat 3 climb in the first third and a Cat 4 followed by a Cat 1 30 km from the finish. Unsurprisingly Cannondale’s super-rider Peter Sagan took the win, leading a late-race, four-rider break across the line. Sagan, at 23 barely starting his career, can climb as well as sprint with some of the best—he is an amazing cycling talent.

Stage Four was another stage which could go to the sprinters, but only if they could drag themselves over a pair of Cat 2s and a Cat 3 climb. RadioShack’s old man, Jens Voigt, led a three-rider break and was the last to be caught just two kilometers from the finish.

The run-in to the finish line included a 90-degree left-hand corner in the final 200 meters. FDJ’s Arnaud Demare made the most of this, taking the inside line and passing several opponents, with Orica’s Matthew Goss on his right shoulder. Peter Sagan picked the wrong line and got pushed almost to the barrier on the far right.

The final 150 meters sloped slightly downhill; Demare started sprinting with Goss and Farrar on his wheel. The FDJ rider timed it perfectly. Goss pulled out a second too late; he was within inches at the line, and still accelerating

Stage Five was packed full of climbs, with five Cat 4s in the final sixty km and 300 meters of slight uphill in the final 500 meters. This one also ended with a bunch sprint, but this time Alexander Kristoff (Katusha) edged out Sagan at the line, with Demare taking third.

Stage Six, lumpy with only a pair of Cat Three climbs, was handed to a four rider breakaway, from which Gregory Rast of RadioShack-Leopard Trek took the win—a popular result as Rast is Swiss.

Almost everyone in the peloton was saving his legs for the big mountains of Stage Seven, when any GC contenders would have to make their bids. Chasing a breakaway of four riders at least 25 minutes down in GC made no sense.

Stage Eight would go either to the sprinters or a breakaway, and the final time trial, almost half uphill, wouldn’t favor many riders. Anyone who wanted a cushion going into the final stages needs to build it up on Stage Seven

Stage Seven, the Queen stage, was 206 km long and included four categorized climbs: Cat 3, Cat 1, Cat 4, and an Hors Categorie climb ten km from the finish. A dozen riders escaped on the first climb but were quickly caught; then 14 riders got away, opening a gap of about five minutes.

This group fractured on the final climb; Sky’s Joseph Dumbrowski took the lead with 20 km left. 13 km from the finish and three from the top of the climb, a group of four—Tejay Van Garderen (BMC,) Rui Costa (Movistar,) Bauke Mollema (Blanco,) and Thibault Pinot (FDJ)—attacked, catching Dumbrowski 500 meters from the crest.

Pinot fell back a bit on the most technical part of the climb; Van Garderen, Costa, and Mollema contested the final sprint, with Costa taking the stage win. Mathias Frank held onto the yellow jersey with 13 seconds over Rui Costa, with Saxo-Tinkoff’s Roman Kreuziger third, 23 seconds back.

This left the whole race down to the final 27-km time trial, with its ten-km uphill finish.

The final climb was sufficiently steep that most competitors rode their TT bikes for the first part and switched to road bikes for the climb.

Movistar’s Rui Costa won both the stage and the race with a strong performance, finishing the course in 51.56, 21 seconds faster than second-placed Tanel Kangert of Astana. Bauke Mollema finished third on the stage and second in GC, only eight seconds behind Kangert.

Roman Kreuziger’s seventh-place ride was enough to ensure him third in GC, while Mathias Frank struggled home almost two minutes down, and fell to fifth overall.

Most of these riders—Costa, Kreuziger, Kangert, Mollema, Frank and Van Garderen—will not be team leaders, but which rider the team supports can change mid-race if the leader has a crash or a few bad days.