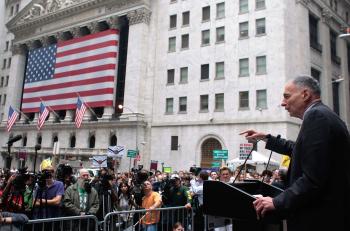 By Heide B. Malhotra
biggersmaller
Print
WASHINGTON—Since Sept. 7, intervention in the financial markets by U.S. and foreign governments has signaled unprecedented changes to the global financial environment.

“[Their] moves signal significant changes in the financial landscape, moving leverage and power from Wall Street to Washington,” say professors at the University of Pennsylvania in a series of reports published by Knowledge @ Wharton (KW), the publishing arm of the Wharton School of Business.

Last month, U.S. Treasury Secretary Henry M. Paulson announced that the Treasury and Federal Reserve Board agreed to place mortgage finance firms Fannie Mae and Freddie Mac under conservatorship “to strengthen the U.S. housing market and promote stability in our financial markets,” according to a statement by Fed Chairman Ben Bernanke.

A week later on Sept. 16, the Fed announced an $85 billion bailout package (later increased to $123 billion) to pump up American International Group (AIG). The plan required that AIG’s assets be pledged as security against default and that AIG issue an 80 percent equity interest for the U.S. government.

With final approval from the House on Oct. 3, President George W. Bush signed a $700 billion financial rescue package into law to prevent a global economic meltdown. This package also comes with quite a few caveats for banks, giving even more say to the federal government in financial matters.

The following week, after Euro zone leaders injected capital into their banks, the U.S. Treasury committed another $250 billion of taxpayer funds to buy out banking institutions. The move aims to unfreeze the credit markets and stimulate lending activities.

This time, the Treasury would become shareholders in all banks prescribing to the stimulation package. Secretary Paulson announced $125 billion in capital injections into nine major U.S. banks, with the rest of the money going to mid-size and smaller regional banks. At the same time, he warned financial institutions not to hoard the money, but to pump it back into the economy in the form of loans.

On Sept. 29, the Dow Jones Industrial Average declined by 778 points, followed by a 485 point rally the next day. News, such as the bank bailout package, reversed the free fall and stocks jumped by 936 points on Oct 13. Since then, the markets have remained jittery, reacting nervously to any good or bad news.

The first ($700 billion) government bailout plan left markets in a deep freeze. Investors were not convinced that it would make a dent in the slide toward a deeper recession. There was an almost unanimous agreement that this package was not going to unfreeze lending and accept market risks.

A major difference between the $700 billion bailout and the $250 billion capital injection plan is that in the first case, the Fed would purchase distressed assets from already shaky banks, while in the second, it would become a shareholder in the bank.

Richard Marston, professor at Wharton, gave several reasons why the first plan failed, while the second brought the stock market immediately out of a free fall.

Instead of being saddled with bad debt—which might sit around and collect dust until written off at a loss to the taxpayer—the government becomes a shareholder and can demand greater transparency in all actions.

The capital injection plan “is a coordinated [global] intervention. In that the British have already started buying equity in the banks, bolstering the banks,” intimated Marston during an interview with KW.

There is less risk that taxpayers will lose, as they hold stock in the respective banks. Under this scenario, banks want to get the government off their backs as soon as possible and will buy back the shares as early as possible. No bank likes the government to constantly breathe down its neck.

“If the banks don’t start paying back after a period of the first few years, the rate of interest goes up on the debt. And so there’s going to be every incentive for the banks to use the equity to bolster their positions,” says Marston.

Time Bomb in the Making

On top of the bailout burden, experts are concerned about constant increases in Medicare and Social Security expenses, which the government has to pay out when the baby boomers turn 65.

The 2007 federal deficit was 1.2 percent of the U.S. Gross Domestic Product (GDP as measured by the income and expenses of the nation). This most likely will change due to retiring baby boomers, companies going out of business, and a slew of additional costs associated with the bailout. Projected tax revenues will also shrink due to weak corporate earnings and higher unemployment.

“That is the time bomb, as far as the deficit is concerned. And if the Congress, and if public opinion-makers pay too much attention to the short-term deficit, they will miss the big picture,” cautioned Marston. “Which is, what we are going to do with the longer-term fiscal health of this country?”

“We have to design a system where participants cannot threaten the safety of the American economy,” says Marston in a recent KW report titled “How the Credit Crisis Could Forge a New Financial Order.”

The new role of the U.S. government in the future financial environment may have unforeseen effects on how business is done.

Wharton professor Franklin Allen worries about even greater risk-taking by the banking industry in the future. The government’s actions set a dangerous precedent for future action under similar distress, Allen says.

Most, however, believe in the idea of becoming a shareholder instead of taking on debt that may have to be written off after a few years at great loss to the taxpayers. They suggest that if the bank’s stock price increases , the “taxpayers” can sell for a profit and earn a dividend in the meantime.