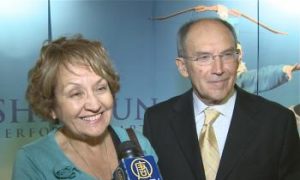 The Apartment is one of those films whose joys don’t age. And though it’s essentially a bittersweet comedy, it has at its heart a bitingly bleak view of corporate America that still has enormous relevance.

Jack Lemmon is perfect as C.C. Baxter, a downtrodden office drone (or “some schnook” as one of his colleagues calls him) working for a faceless insurance company, ironically called Consolidated Life. Ironic, considering its employees regularly cheat on their wives, using Baxter’s apartment as a convenient love nest for their illicit activities, often leaving its tenant to pace the streets alone. Baxter, though, uses his philandering colleagues to work his way up the career ladder, eventually ending up as assistant to the womanising boss Mr Sheldrake (a steely-eyed, cold-as-ice Fred MacMurray)—who happens to be having an affair with Baxter’s object of affection, elevator operator Miss Kubelik (a radiant Shirley MacLaine). When Miss Kubelik overdoses on sleeping pills, Baxter is left to pick up the pieces, but will he get the girl?

Do you need to ask? Billy Wilder expertly balances the tragic elements of the story (and there are many) with sharp witted comedy, but the ending is never in doubt. Although this is a frequently serious film, it is fantastically entertaining, with a cast of wryly observed, well performed characters. Many have strange, amusing quirks, like MacLaine’s circular hand gestures as she waves the lift doors shut, or the frequent use of the addendum “wise” to the end of words: “percentage-wise”, “manpower-wise”, “promotion-wise”. The characters are locked in an endless cycle of work, numbers, cynicism and affairs, with Baxter the whipping boy constantly chasing the dangling carrot of possible promotion.

The Oscar-nominated photography by Joseph LaShelle gives a wonderful feeling of space around the characters, emphasising Baxter’s loneliness as he tidies up after another house guest, or catching the sparkling light in Miss Kubelik’s eyes as she realises her true love. Lines disappear off into infinity – a row of wintry park benches; the hordes of clattering typists on Baxter’s office floor – and we realise the desolation and shallowness of capitalism, the sheer inhumanity of the money machine.

But it’s the wonderful performances from the central triumvirate that make The Apartment such fun, and not the tragic, downbeat experience it so easily could have been. Lemmon in particular is at the height of his powers, mugging his way through the early scenes with impeccable timing. MacMurray’s callous alpha male is also memorable, and MacLaine’s Kubelik positively glows, at times smart and sweet, at others lovelorn and emotionally torn.

It doesn’t come much better than this—one of Hollywood’s last great black and white films.