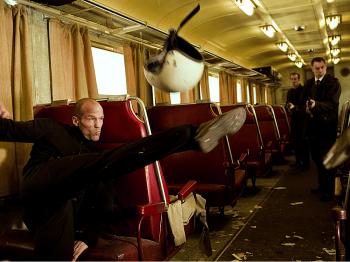 By Mike McCaw
Print
Here comes nonstop action in the third installment of the Transporter movies. Jason Statham stars once again as Frank Martin, the transporter who delivers.

The Transporter series started out with former special operative Frank Martin offering his package delivery services. His unique business consisted of a set of rules that were to be followed during any job. He had a policy of not exchanging names, and only wanted to know the package destination, weight, and size—that’s all.

Unlike in the previous two Transporter films, this time Martin is forced into a job that he initially tried to reject. Instead of taking the work, he recommends another transporter to deliver the package. To his surprise, Martin learns that his replacement has failed when he comes crashing into his living room, Audi and all.

The action in Transporter 3 far exceeds that of the last two movies. In this film, there’s much more action and less talk. There was even a T-shirt printed for the film crew that reads: “Less talk. More action.”

Driving stunts were executed by the same stuntmen who have been driving in the Bond movies for the last decade. Unlike the majority of action films that employ mostly computer-generated images (CGI), Transporter 3 features real stunts such as landing a car on top of a train.

As with the other Transporter films, the car scenes are really the backbone. And the combat scenes definitely stepped it up a notch from the previous installments. Fighting sequences went from seconds to minutes in length, and they have become a more distinguished part of this Transporter. The fight scene choreographer was Cory Yuen, who worked with martial artist Jet Li before moving on to choreograph scenes in Western movies.

As always, Jason Statham plays a great Frank Martin, and this time he was able to offer more when it came to character development. In the past, Statham depicted Frank Martin as a hard-edged, bare-knuckle transporter who showed little emotion. In the new film, he is given an opportunity to display a side of Martin that Transporter enthusiasts haven’t seen. Statham has space to work with a more compassionate side of Martin, which has always been hinted at in the past but hasn’t fully materialized until now.

Russian newcomer Natalya Rudakove plays opposite Statham as an over-privileged Ukrainian daughter of the prime minister. You can most certainly tell that this is her first time on the big screen.

In such an intense action film, added suspense and drama would have balanced out the experience. Perhaps those T-shirts worn by the production crew could have read “More action, though we still need to talk some.” However, if action is what you’re in search of, then Transporter 3 is the movie for you.