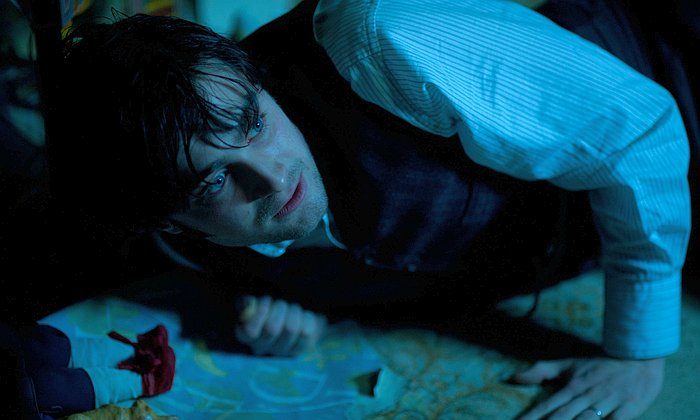 Daniel Radcliffe in “The Woman in Black,” as a young widowed lawyer who travels to a remote village and discovers a vengeful ghost that is terrorizing the locals. (CBS Films Inc.)
Entertainment

Movie Review: ‘The Woman in Black’

It seems everyone is jumping on the “let’s make a play into a movie” bandwagon—Spielberg’s “War Horse,” the upcoming “Les Misérables,” and now something from the horror genre.

Based on Susan Hill’s novel, which has also been adapted into a stage presentation, “The Woman in Black” is legendary horror production company Hammer’s latest film. (The company was also behind the successful remake of Sweden’s “Let Me In” in 2010).

In the wake of moviegoers’ obsession with the horror genre in these past few years, it’s no surprise that many of Hollywood’s brightest stars are clamoring for lead roles in films that aspire to scare, chill, and sometimes inadvertently humor the audience.

Boy wonder Daniel Radcliffe is eager to show the world that he’s more than just the beloved Harry Potter. And, for the most part, he’s successful in proving his range in his lead role as Arthur Kipps, a widowed lawyer whose wife passed away from giving birth to their son Joseph. His employer sends him to a deserted English village to help settle legal affairs for his recently deceased client.

Things quickly start becoming weird when Arthur encounters a specter resembling a woman dressed all in black, and even more chilling when children begin dying under mysterious circumstances.

While “The Woman in Black” thankfully avoids the gratuitous blood and gore of most horror films being made today, unfortunately the weak plotline and over-manipulative scare tactics border on cheap and almost humorous. Instead of filling in the holes in the story, Watkins and team seem more intent on painfully prolonging the suspenseful, edge-of-your-seat moments, to the point where it becomes tiresome and overly heavy-handed.

Despite the one-dimensional lackluster storyline, “The Woman in Black” nevertheless entertains and deserves recognition if only for its haunting cinematography and strong cast with supporting characters, including the great Ciarán Hinds and Janet McTeer. It gets an additional half star for its nod to the classic Victorian haunted house genre.