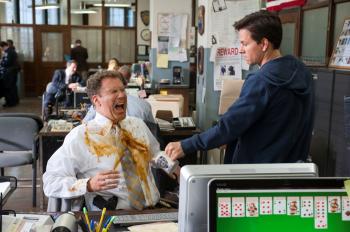 THE OTHER GUYS: Will Ferrell and Mark Wahlberg in 'The Other Guys.' (Macall Polay/Columbia Tristar Marketing Group)
Entertainment

Movie Review: ‘The Other Guys’

Helena Chao
View profile
Follow
biggersmaller
Print
In the fourth collaboration between director Adam McKay and Will Ferrell, “The Other Guys,” is a surprisingly delightful hit, easily becoming this summer’s funniest flick to date. While the plotline plays out a bit like a ponzi scheme (read: tough to follow), the hysterical banter, flashy Michael Bay-esque action scenes, and Michael Keaton more than make up for it.

Allen Gamble (Ferrell), an accountant for the NYPD, and his partner Terry Hoitz (Wahlberg) are considered the “other guys,” living in the shadow of police super heroes Danson (Dwayne Johnson) and Highsmith (Samuel L. Jackson). When misfortune befalls NYC’s beloved cops, will the “other guys” step up and prove themselves worthy of carrying their badge?

The pairing of Ferrell and Wahlberg couldn’t have worked better; Wahlberg’s deadpan macho humor serves to bring out Ferrell’s comedic genius to a whole new level, as he reinvents himself once again as one of today’s most versatile comedians. Michael Keaton, in his second comedic performance this year (he lent his voice as “Ken” in Toy Story 3), proves that he is worthy of being taken seriously as a comedic actor. Playing NYPD Captain, Mauch, who moonlights at Bed, Bath, and Beyond to pay for his son’s college tuition, Keaton delivers some of the funniest lines in the movie (in the form of lines from a famed R&B group).

I don’t know if it’s because I came into this movie with such low expectations (the trailer does not do this film justice!), but it was a fantastically funny ride, made even more interesting by McKay’s attempt to center the humor around a white collar crime plot. And for the action buffs, this movie has some of the most exhilarating scenes I’ve ever seen shot in Manhattan. It’s got a little something for everyone—thriller, crime/suspense, and lots and lots of unadulterated humor. Ferrell, Wahlberg, and Keaton all leave us wanting more.