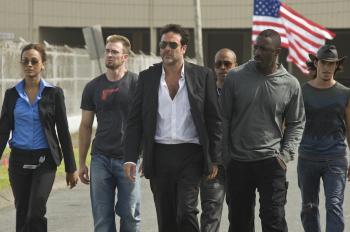 By Matthew Rodgers
Print
You wait 23 years for a movie about “a group of crack commandos wronged by their own government” to arrive, and then two come along at once. Joe Carnahan’s [i]A-Team[/i] arrives later this summer, and in the meantime we will have to make do with this C-list A-Team.

While on a covert South American op, our bunch of losers – Clay (Jeffrey Dean Morgan), a stoic leader with a history of putting what’s in his trousers before the team, Jensen (Chris Evans), the tech guy with the smart mouth, Roque (Idris Elba), the ying to Clay’s yang and the brains of the outfit, Pooch (Columbus Short), his lot in life is to be the “driver”, and finally Cougar (Oscar Jaenada), the silent assassin – are abandoned and left for dead by the Black Ops head honcho Max. Scorched by this betrayal, they make it their next mission to gain revenge and get their lives back.

[i]The Losers[/i] doesn’t pretend to be anything other than a balls-to-the-wall action movie, unashamedly flaunting its graphic novel origins with stylish opening and closing credit sequences, and the highly effective, kinetic framing of the breathless opening rescue mission. Cameras zoom above and through the mayhem that suggests a storyboard lifted straight from the inky page.

Sadly, this grimy appeal doesn’t gloss over the achingly two-dimensional characters. A collective of quips and clichés, only Idris Elba (superlative as [i]The Wire[/i]’s kingpin, Stringer Bell) with his imposing stature and lucid drawl, and the cocksure patter of the soon-to-be Captain America, Chris Evans, escape any criticism.

Zoe Saldana was actually more rounded in her CGI [i]Avatar[/i] form; here she is nothing more than gun-toting eye candy.

The biggest loser is Jason Patric (a man whose CV will be forever blemished by [i]Speed 2: Cruise Control[/i]) playing a character built up as this intimidating crime lord only to actually show up and deliver an agonisingly inept performance of simpering sarcasm that strikes a bum note with every cringe-worthy line. He winds up as intimidating as a prissy show dog.

Action junkies should lap up the rigid formula of “action-banter-action-banter-and so on” and the annoying ruckus of the booming soundtrack, because it has a 50 per cent strike ratio. When it hits that target you get scenes such as the fisticuffs foreplay of Saldana and Morgan, or the craziness of a downtown carjacking using a helicopter, and finally the best use of a song accompanying action since [i]Face/Off[/i]’s ‘Somewhere Over the Rainbow’ set-piece. Here you get Journey’s, ‘Don’t Stop Believing’ for the bullet balletics.

This is memorable only in the moment, while you munch on the popcorn safe in the knowledge that you’ve left your brain at home. Complete and utter nonsense.