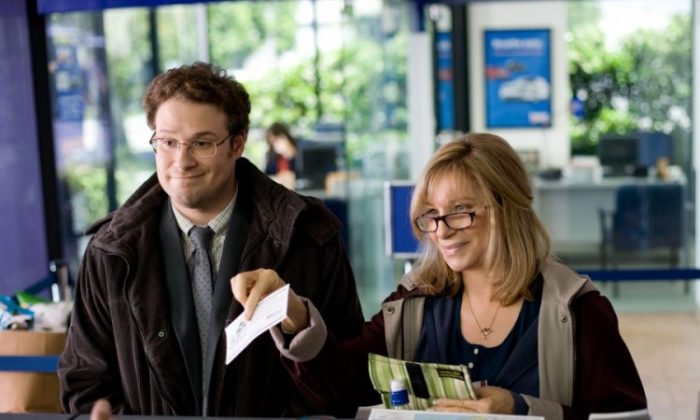 Andrew Brewster (Seth Rogen) and his mother, Joyce Brewster (Barbra Streisand), embark on the road trip of a lifetime in the comedy “The Guilt Trip.”(Sam Emerson/ Paramount Pictures Corporation)
Entertainment

Let’s be realistic. Who would voluntarily spend eight days on the road in a car driving across the country with their mother? Not many people would. Yet somehow in “The Guilt Trip,” Seth Rogen and Barbra Streisand prove that spending time together with your mother forms closer relationships in unexpected ways.

Andy Brewster (Seth Rogen), an organic chemist and the inventor of a revolutionary cleaning solution, visits his mother, Joyce (Barbra Streisand), before he has to embark on a weeklong trek across the country pitching his miraculous cleaning formula to retailers and companies.

Andy asks Joyce to join him on his trip out of guilt when she spills an important story from her life and shares that information with him. As annoyed as he is with his mother, Andy wants her to be happy and self-fulfilled, so he secretly plans for Joyce to reunite with her lost love by the end of his business trip in San Francisco.

Their journey pushes them to new limits in their relationship but gives them each a new point of view into the other’s life as they discover that they have more in common than they originally believed.

Rogen is a natural comedian, and Streisand is an award-winning industry legend. Though they are not an obvious pairing in comedy, together they were magic.

In the film, both Rogen and Streisand are engaging beyond the surface level of the mother-son relationship, to the point where you often forget that it is Seth Rogen and Barbra Streisand on the screen. Instead, you think you are watching normal interactions between parent and child.

As characters, Andy and Joyce are easy to follow and realistic. Streisand’s performance as a single mother is perfect. She embodies every aspect and emotion of being a mother, and that translates very well in her scenes.

What is particularly commendable of screenwriter Dan Fogelman (“Crazy Stupid Love”) and director Anne Fletcher (“The Proposal”) is the focus on the mother-and-son relationship between Andy and Joyce. There are a few romantic storylines on the side, but none of them are cheesy, nor do they take attention away from Andy and Joyce’s newfound understanding of each other.

The plot isn’t pressured to make their destination a sappy conclusion. Even the supporting actors and actresses aren’t as present. The film focuses heavily on Rogen and Streisand but keeps it fun, which is what makes “The Guilt Trip” one film worth sitting through.

“The Guilt Trip” does everything right and hits all the correct notes. It embraces heart, personality, and humor. As long as you don’t expect too much out of it, you’ll find yourself content and entertained. It’s a little heartwarming story that reminds the audience that as annoying as mothers can be, they give unconditional love and support.