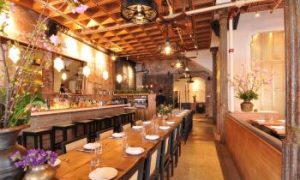 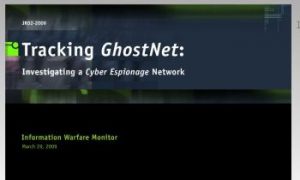 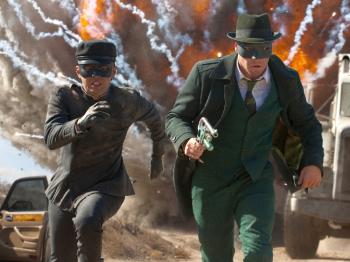 By Matthew Rodgers
Print
The Green Hornet is a property that, much like its masked vigilante, has been enigmatically whispered about for the last two decades as a potential franchise. Perhaps the studio was reluctant to gamble on what is a truly cult comic book superhero – until the likes of Iron Man had paved the way for lesser known heroes to succeed.

The Green Hornet was originally a serialised 1930s radio show, then a kitsch 70s TV show starring Bruce Lee, and now a Seth Rogen and Evan Goldberg (the Superbad scripters) actioner. Strangest of all, Eternal Sunshine of the Spotless Mind director Michel Gondry is the man tasked with bringing it to life.

Ticking all the boxes when it comes to comic-book clichés, volume one is the story of millionaire playboy Britt Reid (Seth Rogen), a loud, obnoxious, excessive chauvinist who experiences an epiphany when he inherits his late father’s newspaper empire: he wants to save people, and kick some butt while doing it. Assisting him, or should that be doing all the work, is coffee-maker turned tech genius, Kato (Jay Chou), a nimble footed fighting expert who shares Reid’s passion for crime fighting. Together they bumble their way though the city’s numerous drug gangs on a collision course with Christoph Waltz’s insecure Kingpin.

Despite setting out to establish its own identity – low key opening credits, a caped action figurine having its head unceremoniously ripped off – The Green Hornet is comfortably familiar within its ever expanding cinematic genre. We aren’t treading any new ground here and attempts at superhero deconstruction pale in comparison to Kick-Ass.

That being said, it doesn’t prevent Gondry’s slice of retro fused fun from becoming an effortlessly hip genre entry. The biggest surprise is that it’s down to the two elements that generated raised eyebrows when the production was announced; the Gallic director and Seth Rogen.

Not as showy as one would expect, Gondry keeps his tricks up his sleeve for when he really needs them, so action plays out in a very simple but effective manner, with car chases, gun fights and on-foot pursuits. It all fits perfectly with the overriding feeling that it’s a film in the mould of the earliest comic-book incarnations.

When the flourishes do appear, they’re fantastic effects that at times make the film seem like a moving storyboard; the vehicular seduction scene, Kato’s fight sequence dissections, and a truly brilliant split-screen, bad-guy rabble rousing segment.

As for the fanboy baiting Rogen, his “man-child” routine will still grate for those that hate, but his comedic charm does give the movie some fairly decent laughs along the way, mainly thanks to some excellent chemistry with Chou and a couple of classic exchanges with Cameron Diaz’s reporter.

Throw in an eclectic soundtrack, a couple of unexpected cameos and enough gadgets to make Q "green" with envy, and the only real niggling mis-step is Christopher Waltz’s wasted pantomime villain.