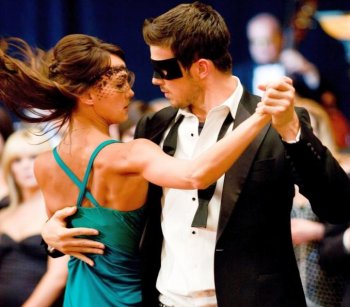 'Step Up 3D' is third installment of the phenomenally and perplexingly successful Step Up series. (Universal)
Entertainment

This third installment of the phenomenally and perplexingly successful Step Up series hops, skips, jumps and triple back flips its way onto cinema screens in that trending multi-dimensional format. Cue jokes about the fact it won’t add anything to a bunch of actors that are so one-dimensional that calling them flat would be a compliment.

But that would be missing the point, as would paying attention to the generous two star rating at the foot of this review, because those behind Step Up 3D, and those that will two-step in their droves to see it, know exactly what they are about to consume in camp, kinetic 3D.

With a plot nowhere near as complex as its choreographed dance routines, this is the copy ‘n’ paste tale of a group of New York dancers that face eviction from their “super cool” attic dance auditorium. With a “like really important” dance competition looming on the horizon, our ensemble – buff, busty, stretchy, red head, and other assorted types – must beat the scowling bad guys in order to take home the top prize and realise their dreams.

This is undeniably enjoyable on so many levels. Whether it’s the unintentionally hilarious, innuendo laden dialogue – “oh, I just play with it” – that will amuse those forced to watch (Parents? Boyfriends?), or the mahogany acting, this truly is so bad that it’s actually quite good.

But that’s simply a by-product of sensibly choosing dancers that can’t act rather than actors that can’t dance, because when Step-Up high kicks into motion the spectacle really is as good as anything a $100m blockbuster could produce.

After the recent success of Streetdance 3D (funded by the controversially axed UK Film Council) and every other Britain’s Got Talent entry being a variant on the troupe dance act, there was a danger that the sequences here would have to go some way not to appear stale.

Fear not, because to the uninitiated (this reviewer has his hand up) what’s on offer here is spectacular stuff that’s aided by the depth of the effective 3D; an early “dust up” set at breakneck pace, the brilliantly chaotic laser infused finale, and with special mention to the Jacko-esque talents of Adam G. Sevani (the only cast member to gain credit on the acting side), a wonderful curb hopping routine that invokes the musical classics.

Barely classifying as a film, this is a series of excellent interludes strung together with a Saved by the Bell storyline, but to borrow some street terminology that I’m barely qualified to use, this may be clunking but it’s most definitely crunking.