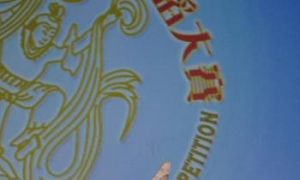 By Helena Chao
Print
Source Code is a thrill-filled, action-packed sci-fi adventure that explores the metaphysical, philosophical, and emotional elements of alternate universes. While many previous films have revolved around time travel, Source Code ventures across the time continuum into a parallel universe, one in which you can replay and rewind scenarios over and over, to effect change in our own universe.

At the beginning of the film, the audience is thrust into Captain Colter Stevens’s (Jake Gyllenhaal) world feeling like a newborn child, emotionally lost and clueless. Colter finds himself in a strange situation, aboard a Chicago commuter train with no recollection of who he is or how he got there.

Christina (Michelle Monaghan), the woman sitting across from him, acts as if they’ve known each other for some time, but Colter feels as though they’ve just met. Stranger yet, after eight minutes, the train explodes and Colter is warped into some sort of military pod where he discovers that he is part of a government-sponsored project called Source Code.

This project enables him to assume another person’s body and identity in a parallel universe, but only for the last eight minutes of this person’s life.

On this particular mission, his assignment is to find and stop the bomber of the train before his next terrorist attack. With each eight-minute attempt, he uncovers more clues from the people in his train car and gets closer to uncovering the terrorist. But will be he able to derail the bombing and ultimately prevent millions of people from dying?

Director Duncan Jones (“Moon”) and screenplay writer Ben Ripley (“Species III”) take this interesting concept and layer in deeper messages, including the themes of sacrifice, duty, and the preciousness of life. Whether you have eight minutes or a lifetime, it’s how you cherish and spend each living moment that counts.

Other overarching themes that are explored in Source Code include the notion of alternate universes and realities, the morality of military research, and doing the right thing, even if it ultimately involves the ultimate sacrifice.

The superbly talented Vera Farmiga (“Up in the Air”) stars as Air Force employee Colleen Goodwin, who helps guide Colter through his mission. Her incredibly nuanced portrayal of her conflicted character helps anchor Gyllenhaal’s performance and adds emotional depth to the film.

Source Code is one of the most brilliant sci-fi thrillers of this decade, full of action and scientifically fantastic and mind-boggling concepts. But, more importantly, it engages, challenges, and touches the audience, forcing us to reflect on our own lives.