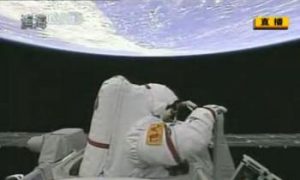 The Shining is the most complex movie ever made, and Stanley Kubrick’s finest. Don’t believe it? Watch Room 237.

The Shining received a muted critical response on its release in 1980, and it has been pretty much ignored since then. But in the last few years in-depth reappraisals of it have appeared online, digging into its dense symbology.

Director Rodney Ascher hones in on five such theories, and presents them in disembodied talking-head interviews accompanied by extensive footage from The Shining and many of Kubrick’s other films.

The most exciting theory – that Kubrick used The Shining to confess that he faked the Apollo moon landing for the US government – is rather glossed over, perhaps because Ascher is more concerned with the intricate puzzles that the film presents in and of itself.

Perhaps it’s a film about the slaughter of Native Americans, whose imagery pervades the background of many shots. Or maybe it’s about the Holocaust, a subject Kubrick would struggle to tackle with his aborted The Aryan Papers project. Or could it be about humanity’s relationship to time, memory, and repression? Maybe it’s all of them.

Although these theories have been around for a few years for those that sought them out, to see them presented this way is incredibly exciting. At one point Ascher runs the film backwards and forwards at the same time to show the spooky juxtapositions that occur; at another he maps the entire hotel to show its architectural impossibilities (or rather, he animates interviewee Juli Kearn’s maps).

The music by Jonathan Snipes and William Hudson is also wonderfully reminiscent of the score to cult 1980s horror Phantasm, all wibbly synths and funky drums.

At times it’s confusing to make out which theory is which, but in the end perhaps it doesn’t matter. It’s joyful to rediscover a 30-year-old film that seems so far ahead of its time its secrets could only be unlocked with technology that didn’t exist when it was made.

On The Shining‘s posters Kubrick presented the film as his “masterpiece” even before the first reviews were in. It looks like he was right.