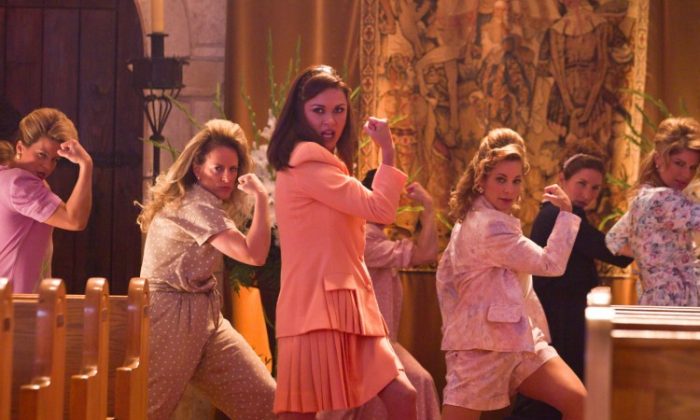 Diego Boneta in the musical comedy-drama “Rock of Ages,” a film about a small-town girl and a city boy who pursue their dreams in Hollywood. (David James/ Warner Bros. Pictures)
Entertainment

In an attempt to revive the rock nostalgia from the 1980s, “Rock of Ages” delivers a one-dimensional musical rom-com embellished with top rock hits from that era, translating like an edgier and more risqué cross between “Footloose” and “High School Musical.”

The film takes place in the year 1987. A sweet, small-town girl named Sherrie (Julianne Hough) leaves her home in Oklahoma to chase her dream of making it big as a singer in Hollywood. Upon arrival, she meets and quickly falls for Drew (Diego Boneta), who works as a waiter at The Bourbon Room, the celebrated rock ‘n’ roll venue run by its manager Dennis Dupree (Alec Baldwin) and his sidekick Lonny (Russell Brand).

The Bourbon Room on Hollywood’s infamous Sunset Strip was where the iconic Stacee Jaxx (Tom Cruise), a tattooed booze-guzzling rock star, became famous. Drew aspires to be just as legendary as Stacee, and in one lucky night, he scores the chance to sing as the opening act for Stacee Jaxx.

Unfortunately, The Bourbon Room is going through rough times. Not only is Dupree having trouble keeping the venue alive due to low funds, but the mayor (portrayed by Bryan Cranston of “Breaking Bad”) and his wife, Patty (Catherine Zeta-Jones), hope to shut it down for good in their declared war to eliminate the rock ‘n’ roll culture because of its negative influence.

The entire cast is on point and perfect for their respective roles. Everyone gets to rock out with a couple of lines or a few songs, but it’s all done Hollywood style, meaning lip-synced with unrealistic choreography.

Mary J. Blige and Catherine Zeta-Jones only enhance the value of the vocal talent as they provide very little comedy to the production. Baldwin and Brand are a hilarious duo, endlessly entertaining, particularly in their duet for REO Speedwagon’s “Can’t Fight This Feeling.”

Cruise steals the spotlight as a muscular, fur-adorned rock-god, living up to all the stereotypes, from the trained pet monkey to the crowds of groupies that hang around him. Cruise takes on the role brilliantly and channels a mixture of rock legends in his rendition of Def Leppard’s “Pour Some Sugar on Me,” and Bon Jovi’s “Wanted Dead or Alive.” His scenes are enhanced by the presence of Jaxx’s immoral manager, Paul (Paul Giamatti).

The screenplay easily loses its protagonist, Sherrie, and her narrative throughout the film as it tries to find a balance between the humor and romance among the subplots. Her path to becoming a singer is ignored for most of the film, and it isn’t until near the end that she is brought back to the audience’s attention.

Heavy with racy scenes and evocative dance moves to depict the rock age that pushes the limits of a “PG-13” rated film, “Rock of Ages” spits out fun, heart-pounding hits of Twisted Sister, Journey, Def Leppard, and Poison. You will want to tap your feet and sing along.

However, even with the combined talents and efforts of a stellar vocal cast and production designers, the weak screenplay was only able to make this no more than a higher budgeted rock edition of “High School Musical.”