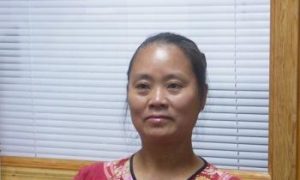 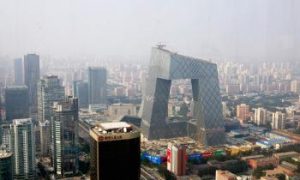 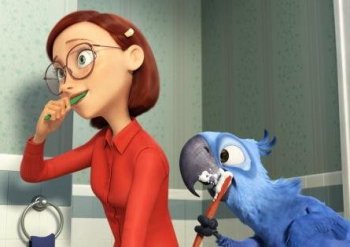 By Helena Chao
Print
The creators of the successful Ice Age series have spent years on Rio, an awe-inspiring, completely immersive 3-D experience that will delight children and bring out the child in every adult.

Director Carlos Saldanha decided to honor his hometown of Rio de Janeiro in Rio, and he and the team at Blue Sky Studios worked tirelessly to create an experience that feels so realistic you almost feel like you’re a character drawn into the richly textured, entirely realistic scenes.

Blu (Jesse Eisenberg), the last male blue macaw in the world, is captured from Brazil as a hatchling and rescued and raised by Linda (Leslie Mann), a mousy bookshop owner in Minnesota. They become best friends and life companions, and Blu appears to almost be a human; he brushes his own teeth/beak, makes coffee, serves as Linda’s alarm clock, and so on.

He’s also very well read, domesticated, and let’s just say that Jesse Eisenberg was a terrific selection to voice Blu—he’s the Urkel of the feathered world. One thing he has not yet mastered, however, is flying. Despite reading many scientific books on the act of flying, Blu for whatever reason, cannot seem to take flight.

One fateful day, ornithologist Tulio (Rodrigo Santoro) pays Linda and Blu a visit from Brazil, begging them to return to Rio with him to give Blu the opportunity to mate with the world’s last remaining female blue macaw, Jewel (Anne Hathaway). After deliberating between themselves, Linda and Blu decide to make the trip and take a step outside their homebody existence.

Blu’s first encounter with Jewel, however, is far from love at first sight. Jewel, it turns out, is the exact opposite of Blu. She’s distrustful of humans, hates being caged up, and isn’t afraid of anything. In her eyes, Blu is a sellout, undeserving of her affections.

But before the two have a chance to really get to know each other, they are stolen by smugglers. Adventure, plenty of laughs, and action ensue as Blu and Jewel, along with feathered pals Nico (Jamie Foxx), Pedro (will.i.am), and Rafael (George Lopez) try to thwart their captors and their evil cockatoo Nigel (voiced by the super-talented Jemaine Clement from “The Flight of the Conchords”). The always-hilarious Tracy Morgan also makes a cameo voice appearance as Luiz, a hysterical bulldog with a severe drooling problem.

Will Blu and Jewel escape and end up falling in love and producing offspring to carry on their species? Will Blu and Linda be reunited?

In addition to the colorful cast of birds and human extras for the film’s Carnival parade, Saldanha’s Rio in and of itself plays a sparkling leading character full of beauty, zest, and excitement.

The catchy music throughout the film, including Latin-inspired samba beats and original hits by the Black Eyed Peas’ will.i.am and the Flight of the Conchords’ Jemaine Clement (guaranteed to have you laughing out loud), will delight your auditory senses while the supercharged 3-D animation will titillate your visual receptors.

This is one of the most ambitious and realistic animated features ever produced, and in addition to enjoying the terrific cast and character development, it’s impossible not to be mesmerized and fully immersed in the three-dimensional experience that is Rio de Janeiro.