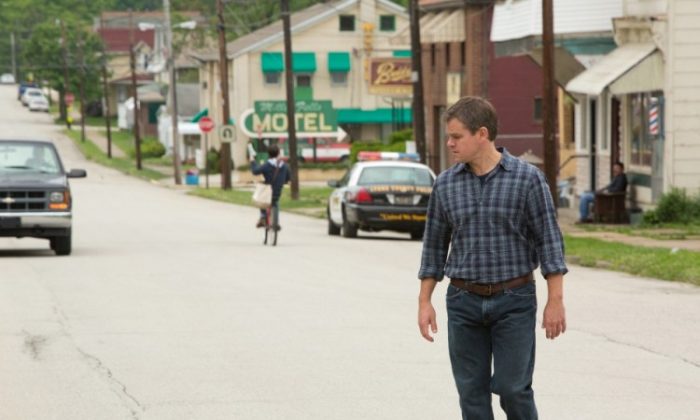 Eco-warrior/actor Matt Damon takes on the sensitive subject of fracking in this old-fashioned style melodrama, with a contemporary eco-twist.

Working as a screenwriter, Damon has again teamed up with director Gus Van Sant, whom he’s previously worked with on ‘Good Will Hunting,’ and now they’ve brought in John Krasinski (from TV’s ‘The Office’) as a co-writer and producer.

Damon plays Steve Butler, a sometimes unbelievably naive gas salesman in the same vein as a classic Frank Capra film, sans the brilliant writing. As the lazy script slogs on, former farm boy turned corporate energy consultant, Steve, along with his partner Sue Thomason (Frances McDormand), are tasked by their company, Global, with traveling to the rural Pennsylvania town of McKinly. Upon reaching their destination, they are to buyout its residents in order to permit fracking on their properties.

As with many smaller American communities that have been hard hit by our recent economic tribulations, McKinly is barely hanging on and is in dire straits. Due to this, many of the town’s citizens welcome the short term monetary gain, while others, such as Frank Yates, a high school science teacher (played by Hal Holbrook), point to Global’s corporate agenda, centered around profits instead of environmental concerns.

Fracking, a controversial method of extracting gas by fracturing rocks, is a loaded subject. Instead of a more conventional corporate villains versus goodie green guys yarn, the story does delve somewhat deeper, exploring the moral conundrum of offering economic support to depressed communities through questionable methods.

A more polished script that had spent a little more time in the lab could have elevated the story to an extraordinary cautionary environmental tale. In the end however, it is still a satisfying crisis of conscience film that will appeal to  environmentally conscious filmgoers, but unfortunately not many others.