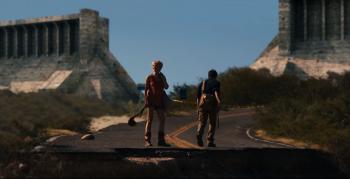 Stefan Byfield
View profile
Follow
biggersmaller
Print
Monsters takes us on a journey through a fractured and scarred Mexico following photographer Andrew Kaulder (Scoot McNairy). He has been charged by his boss to rescue his wayward daughter Samantha Wynden (Whitney Able). Missing the last transport out and with nearly all their money stolen they have to make it to the US border on foot – through the "infected zone", a hundred miles of alien infested territory.

Eggs brought to Earth by a NASA space probe that crash landed in Mexico six years ago have transformed the landscape into a battle ground of panic that is slowly being lost by the military, at great cost to human lives.

It becomes increasingly clear that learning to live with the invaders is the better policy as trying to wipe them out only enrages them into protecting themselves. The dilemma creates an atmosphere of hatred toward the protectors – the USA – as carpet bombing has resulted in a huge loss of civilian lives. It also adds an extra dimension of tension for our two young protagonists, and the audience, as it is not clear where the real danger lies.

Edwards enhances realism by weaving in monster folklore and creates a wildlife documentary type feeling to parts of the film as he explores the aliens' raison d'etre. It is this live action style that he couples to award winning special effects that give Monsters a unique flavour. It also breaks the mould by being bereft of claustrophobic action sequences, so often associated with such a genre, but instead being full of character, flavour, atmosphere and the gut wrenching feeling of suspense.

Missing Monsters is to miss the meteoritic launch of a talented feature director/writer/DoP/sfx kind-of-guy. Miss it at your loss.