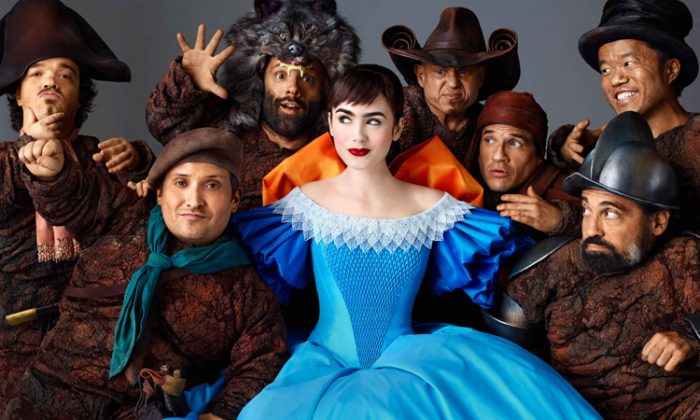 Julia Roberts and Armie Hammer in the comedy-drama-adventure “Mirror Mirror,” a film about an exiled princess winning back her kingdom from an evil queen. (Jan Thijs/ Relativity Media, LLC)
Entertainment

After countless adaptations like the recent new television series “Once Upon a Time,” this year alone, two very different adaptations will take over the big screen. “Snow White and the Huntsman” (set for release this June) seems to be the darker of the two, whereas “Mirror, Mirror” is sweet and rich—but only in color and talent.

The film’s story rehashes much of the same tale: After the king disappears, his new queen (Julia Roberts) snatches the throne and keeps her stepdaughter, the beautiful Snow White (Lily Collins), hidden inside the castle. After many years, the land and its people have fallen into poverty; even the queen has become broke.

When Snow (how the film refers to Snow White) sneaks out on her 18th birthday to visit the village, she attracts the attention of a wealthy prince (Armie Hammer). But he is the same prince the wicked queen wants to marry so that she can live in riches. Snow struggles to reclaim her birthright while the queen seeks to have Snow killed. She learns how to fight from a group of rebellious dwarfs and vies to win her prince back.

Director Tarsem Singh (“Immortals,” “The Cell”) tries to achieve too much in less than two hours but only manages to bring a happier Tim Burton-esque retelling of the beloved fairy tale with fun, flamboyant costumes, and commendable visual design. The pivotal moments that build up the drama don’t wow as much as Singh probably intended for them to and are left hanging halfway.

Although the film provides a few chuckles (mostly lines from the evil queen or the dwarfs), it doesn’t let you overlook the sloppy and scattered feast of magical elements adorned with the expected spells, magic mirrors, poison apples, and seven lovable dwarfs. While this may be sufficient, colorful entertainment for pre-teen girls, most would likely be underwhelmed.

The film, aside from the unbalanced script and themes, actually features a very strong, talented cast. Oscar-winner Julia Roberts effortlessly delivers comical, witty remarks as the queen, greatly outshining Collins’s (“The Blind Side”) lead performance, whose portrayal of Snow is a couple notches too sweet to be true.

Armie Hammer (“The Social Network”) fills the role of Prince Charming perfectly, and even more delightful to watch were the Seven Dwarfs (with altered names from Disney’s version). And of course, it’s impossible to leave out Sean Bean (“Game of Thrones”), who plays the king and leaves a pleasant impression in a short amount of screen time.

“Mirror, Mirror” scores a point for Hollywood’s youthful heroines as Snow reclaims her father’s kingdom on her own without waiting on Prince Charming, but ultimately it proves to be only a rich funhouse of smoke and mirrors without enough heart or gusto to make a dent.