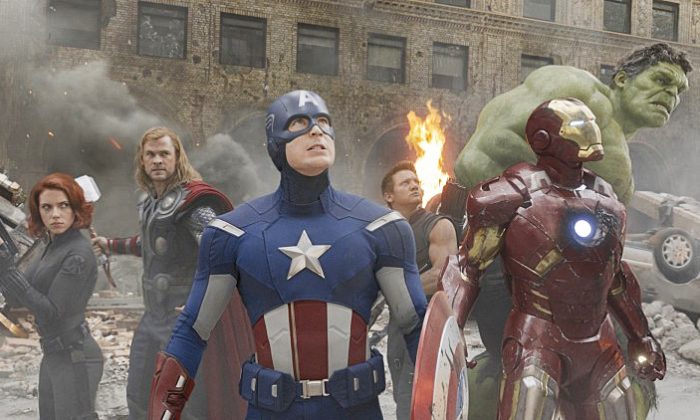 The Avengers (titled Marvel Avengers Assemble in the U.K.) is the culmination of a multiple franchise movie jigsaw, with pieces of Iron Man, Captain America, Thor, and whichever incarnation of the Hulk movies you prefer. It’s all thrown together in a $200 million Disney epic orchestrated by fanboy idol Joss Whedon.

Sharing the closest narrative links with Thor and Captain America, this once again revolves around the all-powerful Tesseract, a cube of renewable energy (isn’t the Maguffin always a blue cube these days?), descended from Asgard, and sought after by those who wish to yield power over the Earth. One such rotter is returning God, Loki (Tom Hiddlestone), escaped from his home planet and intent on making the human race his subjects.

Satisfying for those schooled in the way of Marvel, whether it’s from comic book consumption or simply becoming hooked when Iron Man went stratospheric in 2008, Joss Whedon has created a rousing action epic that takes all of the successful aspects of each character’s franchise and improves on them ten-fold.

Stark is funnier, referring to Thor as “Point Break“, and thankfully his smugness is dialled down. Banner, terrifically played by Mark Ruffalo, constantly rubbing his hands and referring to the Hulk as “the other guy”, is a much more confident character, the neurosis of the Norton and Bana versions left as background story.

But it’s Scarlett Johansson’s Natasha Romanoff who emerges from the carnage with most credit. Perhaps it’s not that surprising considering Whedon’s predilection for strong female characters (see Buffy and Dollhouse). She is the most rounded of the superheroes and shares a genuine connection with most, if not all, of the costumed ensemble.

And therein lies the difference between this and the similarly bombastic Dark of the Moon; Whedon makes sure that you care about these characters before the breathtaking concrete destruction begins. There is a real sense, thanks to the grounded performances, that this group are a team that would fight for each other.

Assembled with enough breathing space for each of the characters to shine, and never once threatening to become a soulless Happy Meal movie, this is a huge unrelenting geekgasm of spectacular proportions.