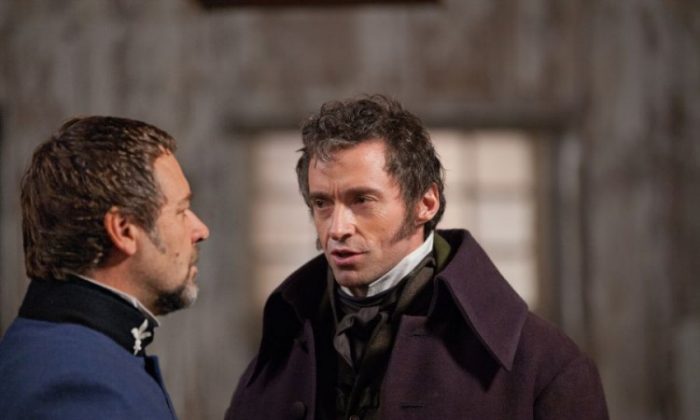 If Victor Hugo were alive today, one would imagine that he would be pleased with Tom Hooper’s film adaptation of his world-renowned novel “Les Misérables.”

According to the press notes, the initial idea for making a film version of one of the world’s most popular musicals came about 25 years ago. The end result is nothing short of spectacular, due in large part to the all-hands-on-deck involvement of the creators behind the musical.

Staying true to the original story, the film opens in the year 1815 with Jean Valjean’s (Hugh Jackman) release after his 19-year imprisonment for stealing a loaf of bread to feed his family. After being shown mercy and kindness by a bishop, Valjean vows to reinvent himself. And after breaking parole, he disappears from Javert’s (Russell Crowe) capture while building a new life as a mayor and wealthy factory owner.

Several years later, the poor, unfortunate beauty Fantine (Anne Hathaway), who is working at Valjean’s factory to pay innkeeper Thénardier (Sacha Baron Cohen) and his cruel wife (Helena Bonham Carter) to look after her daughter Cosette, is kicked to the curb quite literally. We witness one of the most tragic transformations as Fantine quite literally sells everything she owns, including finally her body.

Meanwhile, serving as a backdrop, the French people are becoming ever more desperate as most are living in abject poverty, and there is growing distrust of the French government.

Valjean promises a dying Fantine that he will raise Cosette as his own daughter, and his encounter with the Thénardiers provides the only respite from the otherwise tragic and somber storyline.

Sacha Baron Cohen and Helena Bonham Carter are fully in their element, providing much needed levity and comic relief in their performances as beguiling, deceptive innkeepers with a penchant for stealing.

The love triangle between a grown-up Cosette (Amanda Seyfried), Marius (Eddie Redmayne), who is an idealistic revolutionary hailing from a wealthy family, and Thénardier’s daughter Éponine (Samantha Barks) is beautifully portrayed.

While the chemistry between Seyfried and Redmayne is believable, it is Samantha Barks’s performance (in her first cinematic debut no less!) that steals the show. Her rendition of “On My Own” will touch you to your core.

Given the popularity of the play, with over 60 million people around the world having seen the show, a full synopsis is probably unnecessary. Suffice it to say that “Les Misérables” the film not only faithfully adheres to Hugo’s storyline but also that its groundbreaking approach takes it to a new level of filmmaking.

In hoping to stay true to the powerful emotional backbone of the musical, director Tom Hooper (who won an Oscar for directing “The King’s Speech”) made the daring decision to have the actors sing their lyrics live while filming versus singing to playback.

This decision not only adds to the challenges faced by the actors; it accentuates and deepens the emotionality of the film and the immediacy of the characters, to the point where you might even experience chills down your spine. Anne Hathaway’s chillingly terrific version of “I Dreamed a Dream” will give you goose bumps and bring tears to your eyes.

What is simply extraordinary is the level of commitment and devotion from Hooper and his cast.

Hugh Jackman, according to the production notes, was so dedicated to looking the part of an emaciated Valjean that he went without water for 36 hours before shooting his opening scene. Anne Hathaway lost 25 pounds in 5 weeks and chose to have her real hair cut in the scene where her character Fantine sells her hair and teeth to support daughter Cosette. And Russell Crowe was so passionate about auditioning for the role of Javert that he chose to walk in pouring rain to his audition.

Hooper’s “Les Misérables” is a successful marriage of the best of both worlds: You have the epic grandness of movie-making magic enhanced by a musical’s intimacy and emotional depth, made even more touching with the live singing throughout the film.

Enthusiastically recommended for fans of the Broadway show and for folks who appreciate quite literally feeling the human experience and all the major human emotions—love, loss, sacrifice, redemption, compassion, justice, and honor.