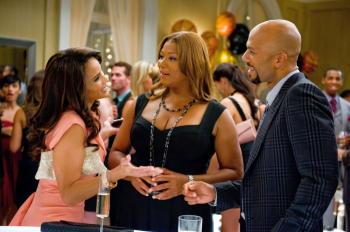 Similar to last year’s surprise breakout hit “The Blind Side,” Moroccan-born director Sanaa Hamri has created a story that fuses sports, humor, and heart that will appeal to a wide audience and both genders.

The plot follows the typical Cinderella love story arc. The difference is that Queen Latifah’s character meets her prince charming (actor Common) at a gas station instead of the ball, where he invites her to a party.

Being the ever true friend, she invites her lifelong girlfriend Morgan to join her. Scott is then tempted by Morgan, creating a love triangle.

Scott falls hard, asking Morgan to marry him. Shortly afterward, his mother, played by Phylicia Rashad, becomes suspicious of Morgan. Scott shrugs off his mother’s warnings. Leslie is not fooled by Morgan’s interest in Scott either. She knows how selfish Morgan really is and knows of her plan to marry for status rather than love.

Scott seems well-balanced, honest, and not easily shaken. But he’s awestruck by Morgan’s beauty and pretentiousness toward him as she travels around town shopping at expensive stores and playing the loving and caring fiancée.

Who will get the “big catch”? Will the charming NBA all-star go for the down-to-earth everywoman or the drop-dead gorgeous, yet shallower companion?

The film features an excellent supporting cast, including Pam Grier and James Pickens Jr. as the protagonists’ loving and caring parents, and the wonderful Phylicia Rashad as Scott’s mother.

The core of the film is of course the chemistry between its two stars. Leading man Common attributes the connection between himself and his leading lady Latifah to their shared roots: They “both come from inner cities,” “both were educated by their mothers,” they both “rose in music and are both now involved in TV and films.”

While perhaps a bit predictable, “Just Wright” is a warm, modern, and widely appealing story.