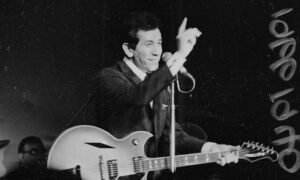 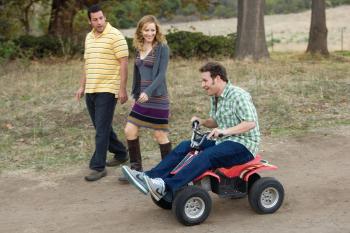 Adam Sandler, in his best performance to date, plays famous comedian George Simmons, who learns that he has a terminal, inoperable form of leukemia. Faced with this news, George realizes that despite all of the fame, money and fans, his life is empty, without real friends, true purpose, and love. He meets Ira Wright (played by Seth Rogen), a budding comedian, at the Improv comedy club and later takes him under his wing and pays him to help write jokes for his standup acts.

Ira and George quickly form a close friendship (which mirrors Judd and Adam’s friendship in real life—the film opens with a home video of the two making prank phone calls) and Ira is the first person George confides in about his illness. Ira eventually becomes George’s voice of reason and like a good friend, tries to help George do the right thing when he tries to destroy a family in order to win back his lost love, played by the effervescent Leslie Mann.

It’s a tale about friendship, love, and redemption. In a recent CanMag interview, Apatow states, "There is always a moment in everybody’s life where they have to decide if they’re going to evolve and make some sort of change. We’re all in the middle of our midlife crises I’m sure and I like to make movies that have a hopeful message, that show some potential for redemption.”

Funny People’s mortality/redemption themes make it a natural follow-up to Apatow’s previous two blockbusters—losing virginity in The 40-Year-Old Virgin and pregnancy/starting a family in Knocked Up. The king of comedy seems to have the Midas touch when it comes to telling real-life dramas softened with humor and wit.

Funny People will make you laugh and cry—it will touch you in a way you wouldn’t expect from an Apatow film.