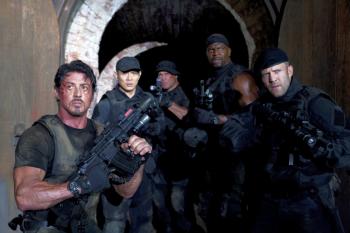 Ben Zgodny
View profile
Follow
biggersmaller
Print
This is one of those films that does not take you by surprise regarding what you’re getting yourself into. It’s violence, macho male bonding, and just about everything expected from a Rambo-styled, explosive machinegun-firing movie. But, it also has a touch of heart and soul, because this mercenary team’s ultimate mission is to save a girl from certain death at the hands of a cruel dictator. Add to boot a who’s who of action stars past, present, and future delivered to you by Mr. Rambo/Rocky himself—Sly Stallone—who directs, stars, and even helped screen write the film.

Stallone plays Barney, the leader of a group of mercenaries that are hired to overthrow a South American dictator. For these guys, it’s just a routine mission, but it turns sour as they find out the mission is not as it seems. They were betrayed but instead of backing out, they decide that it’s better to have no regrets. So they go back to save a life and turn the situation around.

There’s as much good as bad from this movie. As an action/thriller movie fan, it’s truly incredible witnessing such a line up in one film. Having a plethora of Hollywood’s top (Jason Statham) and long-lost (Dulph Lundren) macho action men in one movie is monumental and exciting by itself. There’s also Yin Yang (Jet Li) the token martial arts master, Hale (Terry Crews) as the weapons barrel specialist, Toll (Randy Couture) as the demolitionist, and more.

Certain interactions between these super-action hero legends are stuff you’ll laugh at and want to see again. For example, there’s a great cameo scene of Arnold Schwarzenegger suddenly appearing into a scene with Bruce Willis and Stallone, with one-liners referring to Arnold’s political career. Then there is Tool played by Mickey Rourke, who came in with some heartfelt acting that was impossible to take seriously only because of the weak premise of the movie that’s more about action sequences than genuine drama.

As for the plot and ending, they too are disappointingly generic and predictable. Apparently having this superhero action team in one movie is enough to get a pass on storytelling. Graphically violent, even beyond normal action genre expectations, “Expendables” isn’t for everyone. Yet fans of the genre will be amply satisfied by the action and nostalgia.