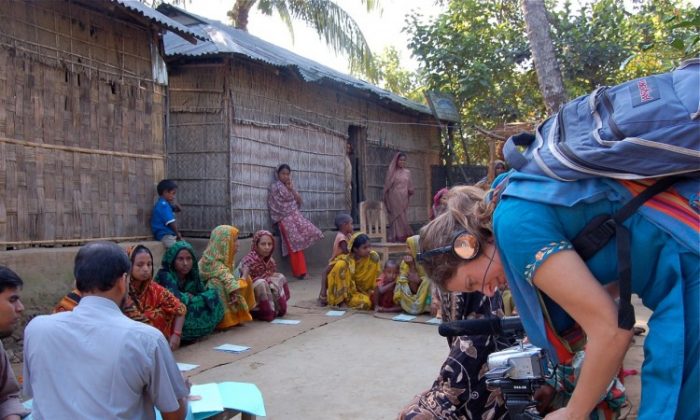 Aroti (R), after establishing herself with the help of Grameen Bank, has become a successful entrepreneur and is now active in promoting women's rights. (Courtesy of Hummingbird Pictures )
Entertainment

The award-winning documentary Bonsai People: The Vision of Muhammad Yunus, by director and producer Holly Mosher, is being brought in a limited release to New York and Los Angeles theaters by Hummingbird Pictures.

The film is an insider’s view of the profound positive effects of micro-finance loans on the lives of five rural women and their families in Bangladesh, the most densely populated, large country in the world.

The force and inspiration behind microfinance is economist Muhammad Yunus, one of only seven people ever to win the Congressional Gold Medal, the Presidential Medal of Freedom, and the Nobel Peace Prize (2006). Founder of Grameen Bank—the Village Bank—Yunus has made it his life’s work to help the poorest of the poor help themselves via microfinance.

What do you call a society where everyone pulls together for the greater good of all? Where women are targeted first and foremost to bring about significant change to the masses?

Women have been the main focus of Nobel Peace Prize Laureate Muhammad Yunus’s mission to bring about change to the poor people of Bangladesh. A former economics professor in Bangladesh, he recognized the need to take action toward making a transformation with the people of his country.

Yunus began first by giving loans, from his personal funds, of $27.00 to 42 people. What caught him by surprise was that the people paid him back. Thus Grameen Bank was formed, offering micro-credit loans to the poor.

The rest is history. From that humble start, Grameen Bank, in 30 years, has grown into multiple organizations and has reached 8 million people worldwide.

Director/Producer Holly Mosher is no less triumphant in her field as a filmmaker. While spending her youth as an exchange student in Brazil, living in less than desirable conditions, her heart turned toward creating films that focus on bringing awareness to how the world perceives the oppressed—shedding light on taboo subjects and disintegrating the dark corners where repression can hide.

Commended for her previous work and most recently her film entitled Hummingbird, this courageous woman goes, camera in hand, where most would recoil. In much the same way as Born into Brothels, an Academy Award-winning documentary feature film by Ross Kauffman and Zana Briski, Ms. Mosher spent several months over a period of four years in Bangladesh, living through cyclones, flooding rivers, torrential rains, and drought, capturing the essence of a culture that transports 100 years back in time.

Sharing in the tenacity of her subjects, Ms. Mosher stands, unwavering, filming the hurricane force winds that topple the flimsy homes, capturing the devastation these people face. And we then witness the village people rebuilding their homes and their lives, never falling prey to giving up.

The film chronicles the lives of five women: first witnessing their tragic circumstances, then receiving their loans, counseling and forming a support system with one another, and then developing their entrepreneurial skills.

One woman in particular, Aroti, a 15-year participating member of the Grameen micro-credit program, rises from poverty to become a community leader in her village, a successful businesswoman and a proud mother, and is able to educate her son, whose goal is to become an engineer.

Mosher had produced commercials and features before deciding to work exclusively on projects inspiring positive change. In various producing roles, she has contributed to films on healthcare, women’s issues, the environment, and election issues, and now Bonsai People: The Vision of Muhammad Yunus.

Available to PBS stations this spring via American Public Television.