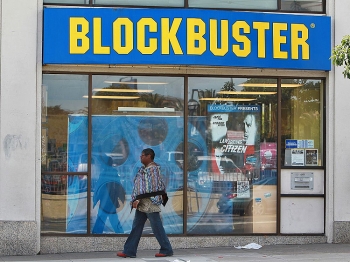 Blockbuster Canada announced it was going into receivership on May 6. Both small independent video stores and the large chains face widespread closures as customers increasingly look to online sources for their entertainment. (Justin Sullivan/Getty Images)
Business & Economy

Justina Reichel
View profile
Follow
biggersmaller
Print
The wave of video store closures sweeping up mega rental chains across Canada and the United States is taking some independent stores out with it, leaving a gap in the entertainment industry that some worry will be filled with Hollywood monoculture.

Online streaming, Netflix, and Redbox kiosks are largely to blame for the decrease in big video rental stores, although one owner of an independent video rental store in Vancouver that is about to shut down says there are also cultural factors at work.

Brian Bosworth, co-owner of Vancouver’s iconic Videomatica, which is closing its doors after three decades, said he has seen a decrease in video rentals since 2008.

He says the factors responsible for the drop are larger cultural, political, social, and economic issues.

“People think it’s Netflix that did us in and did in video stores, but there was a decline in the video rental business in Canada way before that, and a steeper decline in the U.S.,” he said.

A combination of online streaming, video-on-demand, satellite delivery, and even regular television were all “straws on the camel’s back” that eroded video rental profits irreversibly, according to Bosworth.

Bosworth believes that Internet culture is also to blame for the way society views renting movies. He says people now expect everything to be free or very cheap and instantaneous. And the accessibility of Internet entertainment is taking up the time people used to spend watching movies.

A new danger coming with the close-out of independent film stores is that consumers will have less access to smaller, independent films and documentaries, and less knowledge that films other than Hollywood blockbusters even exist.

“Every time there’s a shift in the technology, there’s less actual product, and it becomes more new-release mainstream oriented,” he said. “So there’s a ton of stuff out on DVD that I don’t think people will ever be able to get online, but the fact is they won’t know that they’re not getting it.”

Bosworth says the ubiquitous world of streaming video means that companies ultimately have the power to choose which titles will exist online and that only the movies that have enough market appeal will get chosen, and then they will only be available temporarily.

He predicts this will have a large impact on what types of movies are made in the first place, seriously limiting consumer choice.

“The narrowing of what’s available is definitely going to have an impact on culture,” he said. “I think our [Vidoematica’s] collection is going to be worth more in five years than it is now, just because of the narrowing,” he said.

On their blog, one of the owners of Blackdog Video, another independent Vancouver operation that is also facing potential closure at one of its two locations, asked: “Where will one be able to find obscure films, classic films, foreign flicks, and documentaries?

“There will be an entire generation that will know nothing of film history. All they will know is big Hollywood fare. And that makes me sad and scared.”

Bosworth and his business partner, Graham Peat, hope to sell their collection to a cultural or educational institution accessible to the public in order to “keep some small part of Videomatica alive.”

A legendary source of hard-to-find foreign, classic, and independent films, Videomatica was known across Canada with renters as far away as Newfoundland.

Mega chains such as Blockbuster, Movie Gallery, and Canada’s largest domestically-owned rental chain, Rogers, have seen profits plummet in recent years. Rogers has already closed 74 stores across Canada and reported a retail-related loss of US$39.3 million in its most recent annual statement.

Blockbuster filed for bankruptcy and had closed 3,000 stores before April this year when it was bought by satellite TV company Dish Network.

Blockbuster Canada, which operates independently of the U.S. stores, announced earlier this month that it was going into receivership.

Last August, Movie Gallery, the second-biggest movie and game rental company in the United States after Blockbuster, closed and liquidated all its stores on both sides of the border.

In some places, however, independent movie rentals still seem to be faring well. Last year, Home Media Magazine reported that in some parts of the United States, independent video rentals are rushing to fill stores vacated by the mega-chain companies.

Other smaller outlets are finding new ways to survive in a changing market. Last October, The Hollywood Reporter said that tanning salons were becoming popular additions at many film rental businesses.

With additional reporting by June Kellum.