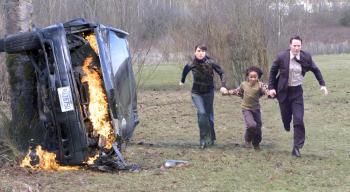 Humanity must be destroyed so that the Earth can survive. At least, according to the alien Klaatu (Keanu Reeves), who spends much of Scott Derrickson’s remake of the 1951 classic “The Day The Earth Stood Still” cryptically warning everyone he encounters of their impending doom. As an emissary from a group of advanced alien civilizations, Klaatu has come to this planet to speak before the United Nations and try to make the world’s leaders see the error of their ways and behave in a more ‘evolved’ manner. Perhaps if they listen to his (somewhat vague) advice, all civilization on Earth won’t be wiped out after all?

Well, wouldn’t you know it, those humans just mess everything up. The icily furious Klaatu is denied his visit to the UN, held as a prisoner by the (sinister, militaristic) U.S. government, and has his preexisting dislike for the human race confirmed by this inhospitable treatment. Things are looking bad for the survival of the species, unless renowned scientist Dr. Helen Benson (Jennifer Connelly) can convince Klaatu that we aren’t all that bad, after all.

The film is mostly the story of her attempts to affect this extraterrestrial change of heart, before Klaatu’s huge automated defense system (giant robot) Gort unleashes its destruction on the world. Along the way, the audience is treated to a mostly wooden performance from Mr. Reeves, which is actually appropriate for the role as he is supposed to lack human emotions. Less excusable is the slightly grating, cartoonishly dumb Secretary of Defense as portrayed by Katherine Bates, who has assumed control over the US government as the president and vice-president go into hiding.

The results are somewhat predictable. Dr. Benson displays a kind of selflessness and compassion in her actions that causes Klaatu to take a second look at the species he is about to brutally extinguish. Instrumental in the process is a tender, well-acted scene he witnesses between the doctor and her preteen stepson, left in her care after his father, her ex-husband, died in Iraq.

The emotional arc between these two is essentially the only real human interaction in this film that mostly centers on larger themes. To the screenwriters’ infinite credit, they avoided inserting the kind of unnecessary, awkward Hollywood romance between the lead characters that would have destroyed the drama and intensity of the film. In such a light, the lack of emotional depth to the rest of the film is mostly forgivable.

Not so the inconsistencies and somewhat frustrating muddiness of the central message, however. This tries to be a film that is about the profound and meaningful, omnipresent conflict between the destructive and creative sides of human nature. Yet it offers no real insight into human nature. We are told that humanity is to be destroyed because it is itself “destructive,” but this is treated as a truism that requires no proof or specific example. We are then eventually told that, on the other hand, humanity has a “better side,” and “can evolve” into some higher state, but this “better side” is not explored beyond the implication that complex mathematics, the music of Bach, and a mother’s love for her son are examples of it.

Why are these things good? And what exactly are the bad aspects of humanity that they are being contrasted with? Pollution and warfare seem to be our main crimes… yet there’s no exploration of specific instances of these misdeeds. The Iraq war and global warming, as the main examples that, one assumes, the writers had in mind, are not discussed directly. It seems odd that the film should aspire to address a question as large as the future of the human race without having the courage to look directly at these issues rather than, apparently, taking pains to avoid mentioning them. In order to really address the questions it attempts to, this film would need to be bigger and at least make a pretense of offering answers, or potential answers to its questions.

It is hard to get away from the feeling that this film was written by a committee. It is worth watching to be (mildly) entertained, and to stimulate thought—but not as a coherent commentary on the subjects it purports to comment on. The effects are nothing special. Only one or two brief scenes make the impending apocalypse seem real, actually conveying the sense of living in a world about to come to an end. This reviewer would have been interested in seeing that side of things explored a bit more.

“The Day The Earth Stood Still” is playing nationwide, and will be released on IMAX screens by December 19th.