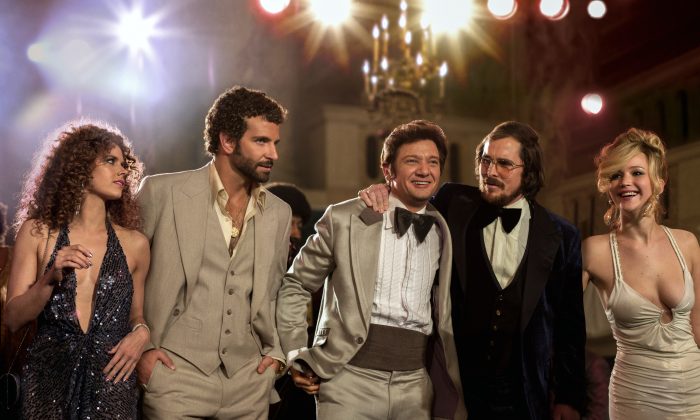 To write American Hustle, Russell visited cast members to have “meetings of the minds.” The film, set in the ‘70s, has so far been welcomed by critics.

NEW YORK—Over the last decade, David O. Russell’s films have followed the ups and downs of his personal life.

He was enjoying a comfortable career as a director of films and television, but difficulties started in 2004, when Russell was shooting the comedy “I Heart Huckabees.” He was labeled as “difficult” when a video of a heated dispute with one of the cast members surfaced on YouTube.

His personal life began to unravel as well, resulting in a 2007 divorce from Janet Grillo. Their 18-year-old son, Matthew, struggles with bipolar.

His rocky circumstances got him rethinking his approach to film. He shifted his focus to the characters and presenting raw stories. In 2010, he released “The Fighter,” an emotionally charged drama based on a real story about a struggling boxer fighting for a second chance and a world title.

Two years later, Russell released “Silver Linings Playbook,” a story about a teacher returning to his family after a stint in a mental institution for bipolar disorder.

“The Fighter” garnered two Oscar wins and five nominations, while “Silver Linings Playbook” reeled in one win and seven nominations.

“American Hustle,” which comes out this weekend, represents the continuation of Russell’s comeback. The film is about two brilliant New York con artists who run an investment firm of questionable repute in an attempt to overcome their difficult backgrounds.

In an interview with film critic Peter Travers on Dec. 9 following a New York screening of “American Hustle,” Russell talked about how his work helps him cope with personal struggles.

“Making certain films might seem very overwhelming, to write or to make happen, but sometimes I have to make it work for myself—I have to trick myself again into doing it,” he said.

For instance, on days when he’s not at his best, he abandons technology and its distractions and turns towards film, memorizing parts of his favorite movies.

“I would go over 20 minutes of a movie in my head, and the storytelling of it, the cinema of it, will change my chemistry for the rest of the day,” he said.

He said it also helps to work with familiar actors—Bradley Cooper, Jennifer Lawrence, Robert De Niro, Amy Adams, and Christian Bale all star in “American Hustle” and at least one of his previous films.

To write “American Hustle,” Russell visited cast members in their homes or called them to have exciting “meetings of the minds.” During these meetings they would create characters for whom Russell would devise with three scenes each. This exercise helped his workflow, and gave him more ideas for the script.

For Russell it’s important to write about ordinary people who live operatic lives.

In “American Hustle,” Bale plays Irving Rosenfeld, a local fraudster born and raised in the Bronx, who meets Sydney Prosser from Albuquerque, N.M., played by Adams. The two make for a compelling con-artist team.

They fall in love, bound by the jazz sounds of Duke Ellington. They get involved in working for the FBI, then, through finding themselves dragged deep into the world of mafia and corrupt officials, they get “slapped straight,” Russell said.

The film, set in the ‘70s, is loosely based on a real-life story, and has so far been welcomed by critics.

“I think if you’ve been down, you can really appreciate picking yourself back up,” Russell said.