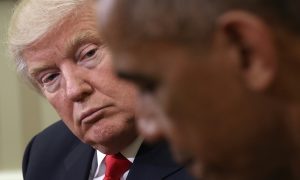 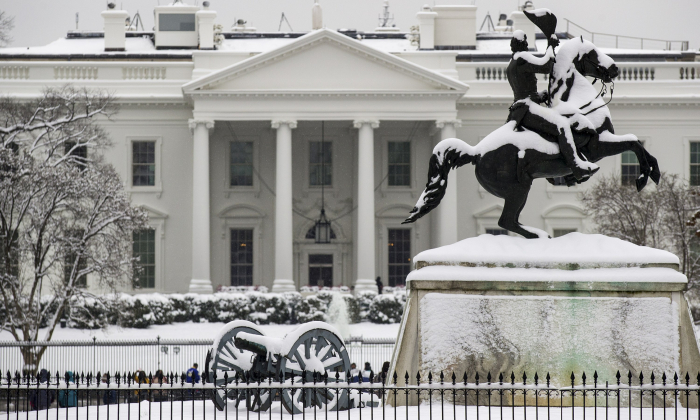 Snow blankets a statue of Andrew Jackson in Lafayette Square with the White House behind, as a winter storm arrives in the region, Sunday, Jan. 13, 2019, in Washington. (AP Photo/Alex Brandon)
Politics

Liberal states and elected officials are mounting an increasingly popular initiative to undermine the Electoral College by awarding state Electoral College votes in presidential elections to the winner of the national popular vote.

Supporters of the effort contend that the Electoral College is unfair, and that switching to a national popular vote would make presidential elections more competitive. But critics say that upending the 230-year-old institution would concentrate power in large urban areas that are almost exclusively Democratic strongholds.

According to Hans von Spakovsky, a former member of the Federal Election Commission, the system was devised at America’s founding to balance the competing interests of large and small states, and to temper the “tyranny of the majority.”

“It prevents candidates from winning an election by focusing only on high-population urban centers (the big cities), ignoring smaller states and the more rural areas of the country—the places that progressives and media elites consider flyover country,” von Spakovsky wrote for the conservative Heritage Foundation.

Having recognized the dangers of direct democracy, the framers of the American system of government established a representative democracy in the form of a constitutional republic, he explained, while adding that the Electoral College “forces candidates to seek the support of a larger cross-section of the American electorate—to win a series of regional elections.”

“One can see its importance in the fact that despite Hillary Clinton’s national popular vote total, she won only about a sixth of the counties nationwide, with her support limited mostly to urban areas on both coasts,” he said.

Clinton would have defeated President Trump in 2016, on the strength of her popular vote margin of victory in California coastal cities alone—whereas a majority of states across diverse regions of the country elected Trump.

Five presidents have taken office without winning the national popular vote, most recently in 2000 and 2016.

Twelve states and the District of Columbia, totaling 172 of the required 270 Electoral College votes, have passed legislation to join the National Popular Vote Interstate Compact. The initiative would deliver the all-important electors to the candidate with the most total votes, regardless of which candidate that state’s residents actually choose.

Colorado recently passed a bill to join the compact, which will be the first presidential swing state in the movement when it’s signed into law; the term swing state refers to any state that could reasonably be won by either a Democratic or Republican candidate. The state’s nine electors will bring the overall total to 181, or two-thirds of the required 270.

Newly elected Colorado Gov. Jared Polis, a progressive Democrat, recently called the Electoral College an “undemocratic relic” of the past.

“I’ve long supported electing the president by who gets the most votes,” Polis said in a Feb. 25, interview. “It’s a way to move towards direct election of the president,” he said.

Maine could be the next domino to fall. The legislature there is currently considering a national popular vote bill sponsored by the state’s Democratic senate President, while the state House is also controlled by fellow party members.

According to a 501(c)4 advocacy group called the National Popular Vote, 11 additional states with 89 electoral votes have previously passed national popular vote bills in at least one house of their respective state legislatures, although they have yet to become law.

The National Popular Vote asserts that the shortcomings of the current voting system stem from a “winner-take-all” design that effectively creates 50 independent state elections, rather than one large direct democracy election.

“Because of these state winner-take-all statutes, presidential candidates have no reason to pay attention to the issues of concern to voters in states where the statewide outcome is a foregone conclusion,” the group says.

The initiative is a clever end-around to abolishing the Electoral College, which would require an effectively insurmountable three-fourths of states, or 38 of 50, to amend the Constitution. Instead, a national popular vote system will be achieved, ironically, by gaining a majority of electors.

According to von Spakovsky, those who want to “junk” the Electoral College are “ignorant of how our federal system of elections works.”

“Our Electoral College system has provided us with orderly elections and a stable government for more than 200 years,” he said.