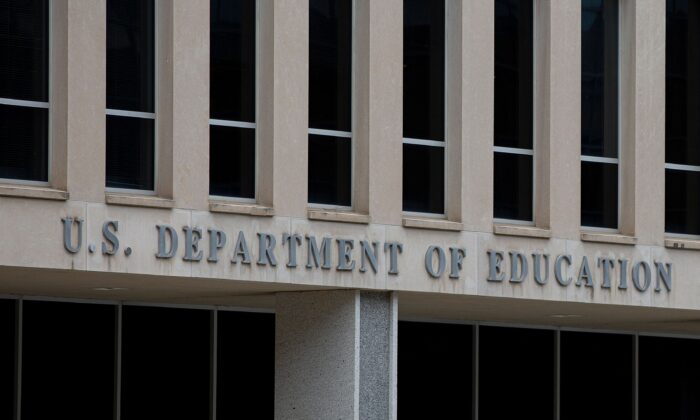 The Department of Education building building in Washington on July 22, 2019. (Alastair Pike/AFP via Getty Images)
US Features

Movement to Abolish the Education Department, Decades in the Making, Lives On

The very day Congress confirmed Betsy DeVos as the Secretary of Education in early 2017, Rep. Thomas Massie (R-Ky.) introduced a bill that would dismantle the federal agency she was about to head.

“The Department of Education shall terminate on December 31, 2018,” the one-sentence bill read.

“Unelected bureaucrats in Washington, D.C. should not be in charge of our children’s intellectual and moral development,” the libertarian-identified Republican said when he introduced a nearly identical bill again last year.

Even DeVos now agrees that her former job, which she quit early, is never legitimate. “I think the department should not exist,” DeVos said in a July appearance on Epoch TV’s “American Thought Leaders” program. “The federal department of education does not add any value to kids’ education.”

The United States had no federal department devoted exclusively to education for nearly 200 years until October 1979, when a Democrat-majority Congress narrowly passed a bill to create a stand-alone cabinet-level bureaucracy out of the existing Department of Health, Education, and Welfare. The move faced bipartisan opposition in the lower chamber, with over one third of Democrats voting against giving birth to a separate department.

The passage of the bill helped President Jimmy Carter fulfill his 1976 campaign promise. Critics of Carter’s presidency argue that this had more to do with rewarding the powerful teachers’ union that had endorsed him than allowing the federal government to meet its responsibilities in education “more effectively, more efficiently, and more responsively,” as the president stated when signing the bill into law.

“It was a political payoff to the teachers’ union that asked more funding to be infused into the government school system and more administrator jobs to exist,” Corey DeAngelis, an advocate of school choice, told The Epoch Times.

The National Education Association (NEA) gave its first-ever presidential endorsement in 1976 after the Carter campaign promised to create an education department.

DeAnglelis’ view is not new. In fact, The Washington Post noted in a 1980 report that the NEA, boasting a 1.8 million-strong membership at that time, had “lobbied for a separate education department for years.”

“At the 1976 Democratic National Convention, more delegates—180—belonged to the NEA than any other group of any kind. They’ve endorsed Carter for 1980, and were a major force in getting delegates to the Iowa caucuses,” the report read. “Is the department, then, a creature of the NEA?”

Opponents call the DOE unconstitutional, on the premise that the U.S. Constitution doesn’t explicitly mandate education as a responsibility of the federal government. Following the principles of the Ninth and Tenth Amendments, one could argue that education is a matter that should be left up to the states and the people.

“The Constitution gives the federal government specifically enumerated powers,” Neal McCluskey, the director of Cato Institute’s Center for Educational Freedom, told The Epoch Times. “None of those powers say anything about the authority to be involved in education, so its creation represents unconstitutional activity.”

Proponents of the federal intervention in education cite the “spending clause” of the Constitution, which authorizes Congress to raise taxes and spend money to provide for the general welfare. The idea is that when a state accepts federal grants, it may be conditioned to adopt certain legal and regulatory changes, including those concerning education.

Aside from the controversies surrounding its creation, DOE critics still find that the department has hardly advanced, if not hindered, the education goals set for the United States.

“I knew before even going there … the federal government does not do education well,” DeVos said when asked about “big lessons” she had learned leading the DOE. “It is not involved in education in a good and positive and constructive way.”

The largest portion of the department’s K-12 budget goes to what’s known as Title I, which supplements state and local education funding for children from needy households. However, the achievement gaps low-income students and their more affluent peers persist 40 years after the DOE opened its doors.

According to a 2019 study by K-12 education magazine Education Next, the gaps in academic performance between low-income and higher-income students didn’t dramatically widen as popularly believed, but didn’t narrow either, despite the DOE’s decades-long efforts to close them.

Meanwhile, the DOE under President Joe Biden recently tried to tighten regulations on public charter schools, which many financially disadvantaged families rely on to get their children a high-quality education they otherwise cannot afford.

In March, the DOE proposed a new set of priorities, requirements, and criteria that public charters should meet when they apply for federal funds. Under the proposal, public charters seeking federal money would have to prove that their neighboring district schools are “over-enrolled,” which would be impossible since public schools have been losing students nationwide because of the COVID-19 pandemic shutdowns. It also required public charters to submit demographic data to examine its effect on racial segregation, although many of them serve predominately black and Hispanic communities and don’t prioritize racial balance in their enrollment or hiring models.

Facing an overwhelming backlash, the DOE had to back down to allow charters to show proof of demand using evidence other than over-enrollment. The finalized rules also softened the anti-segregation provision so that a school may not be denied funding simply for serving a homogeneous community, although the school must explain why it is “unlikely to establish and maintain a racially and socio-economically diverse student body” and how the “anticipated racial and socio-economic makeup of the student body” would advance the purposes of the charter school program. Still, critics warn that these priorities leave the DOE a potential leeway to deny funding to charter schools.

“Charter schools have incentives to do a good job, because their customers aren’t residentially assigned to them like most government-run schools,” DeAnglis said, noting that the very existence of those schools, which typically hire non-unionized teachers, challenge the teachers’ unions’ monopoly on the teaching profession.

“It’s a slap in the face to families,” he added. “This is another good argument for abolishing the department: Why should the Biden administration be able to protect the status quo teacher’ union’s monopoly at the expense of parents by regulating the teachers’ unions’ competition, which happens to be the charter schools?”

While the discussion of doing away with the DOE has been limited to a small number of politicians and advocacy groups, it has recently gained more popularity among average Americans, many of whom were prompted to look at the public education system more closely during the COVID-19 school closures and started to ask more questions about the role of the federal government in K-12 education.

When President Donald Trump said in a speech in Texas in August that the DOE should be abolished for pushing “inappropriate racial, sexual and political material” on children, his audience broke out into cheers in agreement. But progressive race and gender ideologies are not the only thing the DOE is willing to fight tooth and nail for.

In August 2021, the DOE engaged in a back-and-forth against Florida’s Republican Gov. Ron DeSantis, who signed an executive order that affirmed the parents’ rights to decide whether or not their child wears a mask at school. When DeSantis punished school districts that ignored his order by withholding school board members’ salaries, Education Secretary Miguel Cardona created a fund to support those districts, praising them for “implementing policies that keep their children safe.”

The exchange came after the DOE launched civil rights investigations into five Republican-led states, namely Iowa, Oklahoma, South Carolina, Tennessee, and Utah, over their prohibitions on universal mask mandates in schools. The NEA applauded the move, blaming governors of these states of “choosing partisan politics over protecting students” from COVID-19.

A Road Not Taken

During his address to the nation on economic recovery in September 1981, Republican President Ronald Reagan pledged to abolish the two DOEs Carter created, the Department of Energy and the Department of Education. By eliminating the latter, Reagan said, “we cannot only reduce the budget but ensure that local needs and preferences, rather than the wishes of Washington, determine the education of our children.”

Reagan’s attempt to defund the DOE was ultimately blocked by the House Democrats. “While I still feel that this is the best approach, that proposal has received very little support in the Congress,” he wrote in a 1985 letter, reported Los Angeles Times.

The almost exclusively Republican effort against the DOE was led in the 1990s by then-House Speaker Newt Gingrich, and later Sen. Bob Dole during his presidential campaign. However, the DOE had seen an unprecedented expansion under President George W. Bush via his No Child Left Behind initiative.

Instead of doing away the DOE itself, a more feasible approach could be phasing out its programs, McCluskey said.

While McCluskey questioned whether there will be conservative-led effort to end the DOE for the 2024 election cycle, DeAngelis expects the popular pro-abolition movement to grow stronger.

“A lot of families see that the federal department of education can be weaponized by whoever is in power,” DeAngelis said. “Parents care about their kids more than anybody else. So I’m optimistic that this momentum is going to continue.”