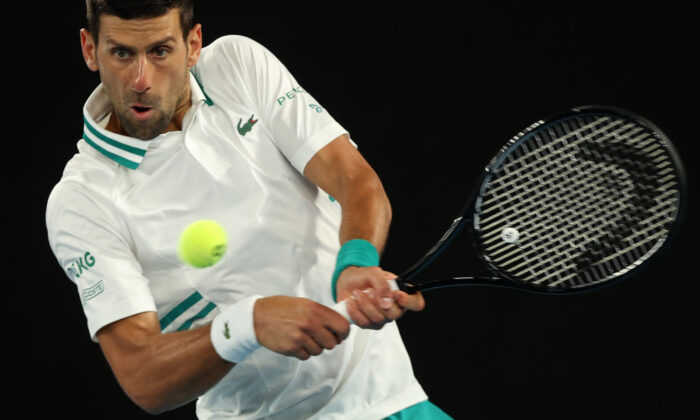 Move Against Djokovic Unlawful: Australian Government Shoots Itself in the Foot

If we cut to the chase, the only legitimate interest the Australian, or indeed the Victorian government, have in the otherwise legitimate visit of tennis star Novak Djokovic is whether there is any risk of his infecting anyone in Australia with the Wuhan virus, also known as COVID-19. The same principle applies, with greater vigour, to Australians returning from overseas.

If the answer is no—as it unquestionably is in Djokovic’s case—the Australian government should get out of the way and allow him to participate in the Australian Open. But, in fact, it was a serious political error and worse, a gross injustice and abuse of power to move against him in the way that it did.

It should not matter what his risk-free status is, since he did recently contract and recover from the virus. Indeed, some authorities believe this gives greater immunity and thus a lower likelihood of carrying or transmitting the virus.

It is also legitimate to require that he be tested and perhaps tested from time to time, as he no doubt was before he came. Otherwise, he should be left alone by government and not subjected to sanctions.

Any politician who thinks otherwise and worse, would impose mandatory COVID-19 injections, holds a position not consistent with what Australia was until recently, a constitutional democracy under the rule of law.

It is not for governments to insist that people be vaccinated, particularly with a new vaccine that has not been tested rigorously and which cannot guarantee the person injected will neither catch the virus nor transmit it to others. As a retired doctor recently observed to me: “So what is the point of the injections and these boosters after boosters?”

So why, after the visa was issued and Djokovic was on his way to Australia, did the government decide to make an example of him?

One possibility is that the media reported some hostility to Djokovic on his announcement that he was coming to Australia given that he was believed to hold strong views against vaccination.

There is an enormous and legitimate reservoir of resentment in Australia concerning the outrageous and unnecessary mistreatment of the Australian people in relation to the virus. Rather than attack Djokovic, this anger should be directed against the political leaders who mistreated the Australian people through the neutralisation of the checks and balances once considered normal in our constitutional system.

There is also a suspicion that some people in the federal Coalition government saw a political opportunity in deporting Djokovic. This is thought to be motivated not only because of his opposition to vaccination but also to expose the self-evident hypocrisy of the Victorian Labor government.

Strong supporters of mandatory vaccination, Victorians still wanted Djokovic as the star of the Australian Open to be held in their capital, Melbourne. Ranked World No. 1 by the Association of Tennis Professionals and holding a record 20 Grand Slam men’s singles titles, including a record nine Australian Open titles, he is a star attraction.

Although the actual control on entry was slapdash—something I saw myself, the federal government acted properly in temporarily stopping flights in 2020 from China when it first became aware of the virus.

But since then, all Australian governments have seriously mismanaged the virus. The adoption of the communist model, wholly unnecessary lockdowns, with resulting damage to millions of Australians and the incurring of massive public debt, can never be justified. Their cure has proved far worse than the disease.

The federal government has blamed the states for the excesses, but in reality, the federal government underwrote them while refraining from using its substantial powers to keep internal borders open, and people in business and employment, as well as children in schools

Those political leaders have notoriously justified Australia’s lower death rate from the virus on their draconian measures, but the reason for this is a simple fact of geography. As with New Zealand, Australia has the great advantage of being a remote island nation.

Having decided public opinion would support deporting Djokovic, the federal government could not have been more heavy-handed. Not thinking of the reaction by all right-thinking people, they treated him like a common criminal, denying him access to lawyers and tennis officials, demanding he supply information at 4 a.m. as a theatrical prelude to a decision already taken to revoke his visa.

As presiding Judge Anthony Kelly said, a “professor and an eminently qualified physician have produced and provided to the applicant a medical exemption … That medical exemption and the basis on which it was given was separately (verified) … by a further independent expert specialist panel, established by the Victorian state government. And that document was in the hands of the delegate.”

The judge added “And the point I’m somewhat agitated about is, was what more could this man have done?”

The politicians should be reminded that this judgement was based on a well-argued case not questioning the validity of the regulations.

The lawyers probably decided not to advance for the benefit of a visitor the legitimate argument that any regulations which impose double vaccination, rather than merely requiring proof of the absence of infection, may well be unlawful.

There is one final question. Why did the federal government instruct counsel to advise Judge Kelly that Immigration Minister Alex Hawke would now consider whether to exercise a personal power of cancellation over Djokovic’s visa.

The result is that Minister Hawke will be criticised for whatever he does or does not do. And if he tries to deport Djokovic, he will achieve worldwide notoriety with the possible destruction of his political career.

As Judge Kelly said “In a view, the stakes have risen rather than receded.”