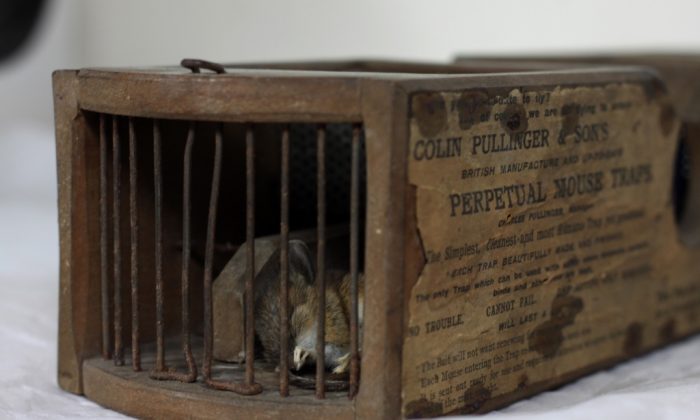 A mouse was apparently killed by a 150-year-old trap inside a museum display in the United Kingdom, officials said.

Staff at the Museum of Rural Life in Reading, England got an email saying that a dead mouse was found in a mousetrap.

“There appears to be a dead mouse in this mousetrap … which is not described as being there on the database,” read the email.

It appears that the mouse went to the trap, which was part of a gallery, for warmth, the museum stated.

“So, this retired rodent had managed to sneak past University of Reading security, exterior doors and Museum staff, and clambered its way up into our Store. Upon finding itself there it would have found the promised land; a mouse paradise laid before it full of straw, wood and textiles. Then, out of thousands of objects, it chose for its home the very thing designed to kill it some 150 years ago: a mouse trap,” stated the university.


The old trap was not baited. It was manufactured by Colin Pullinger & Sons of Silsey, West Sussex. It’s unclear exactly when the trap was made, but it was patented in 1861.

The trap, however, says that it will “last a lifetime,” which is appropriate.

“For the moment, however, the mouse remains in the trap while we decide what to do with it. One option is a dignified burial, another is to desiccate it or have it prepared to remain as a permanent feature of the mouse trap for our new displays. We’ll let you know what we decide,” the curators said.