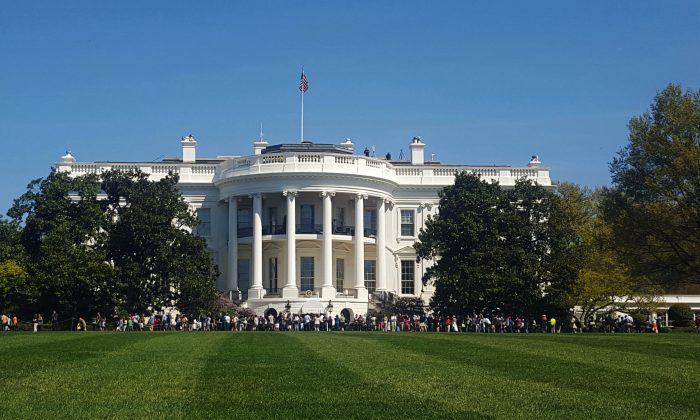 A mouse fell from the ceiling of the press booth at the White House, sending reporters scurrying. The mouse landed directly on NBC reporter Peter Alexander.

Reuters correspondent Steve Holland tweeted photos of reporters scrambling out of the press room as the mouse ran around the room.

One video shows the mouse running behind tables and equipment.

Jabin Botsford of the Washington Post also wrote that the mouse fell in the NBC News booth after “falling from the ceiling and landing on” Alexander.

Breaking 🚨🚨🚨 there is a mouse in the White House press area. I repeat. There is a mouse on the run. And all hell has broken loose. https://t.co/e31ZKdP0hu

Recent pictures taken by an Associated Press photographer showed how first lady Melania Trump has upgraded the White House ahead of a visit from the prime minister of Australia and his family for the second official state dinner.

AP noted that there is the new fabric in the Red Room, new draperies in the Green Room, and newly restored furniture in the Blue Room.

In the Red Room, the wall fabric was “so faded it was almost pink,” said Stewart McLaurin, president of the White House Historical Association, AP reported.

“Those rooms should always look their very best and it was just very faded and really, really needed to be done,” McLaurin said. His organization was founded by former first lady Jackie Kennedy in 1961.

“The White House does get a lot of wear and tear,” he added, the news agency reported. The White House gets hundreds of thousands of tourists and visitors, including state dignitaries, per year.

All first ladies have to partake in caretaking, meaning that she has to meet with the chief usher, the head curator, and other staff at the White House on how to improve the premises.