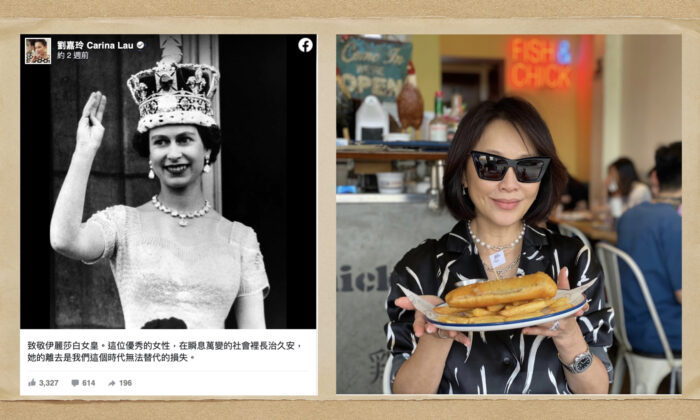 Hong Kong actress Carina Lau Ka-ling and other Hong Kong actors posted their condolence messages to the death of Queen Elizabeth II on social platforms, but unexpectedly attracted the groups of Wumao, which literally means 50 cents in Chinese (commentators hired by the Chinese Communist Party receive 50 cents to manipulate public opinion to benefit CCP), leaving unbearable comments such as “what does the Queen of England have to do with you, go with her” and so on.

In response to the comments, Carina posted a photo of herself wearing jewelry and enjoying a whole roast chicken on Facebook on Sep 14, and it seemed that her mood was unaffected.

Queen Elizabeth II, who reigned for more than 70 years, visited Hong Kong twice before the transfer of sovereignty to mainland China. She was respected and loved by many Hongkongers.

After the news of the Queen’s death was released, Carina immediately expressed her sorrow on Instagram and Facebook, posting a black and white photo of the Queen when she was young, with the caption: “Tribute to Queen Elizabeth. People lived in a long period of peace and stability in this rapidly changing society under this wonderful woman’s reign, her death is an irreplaceable loss of our time.”

Unexpectedly, the groups of Wumao flocked to Carina’s Weibo (social media platform in China) and scolded, “what does the Queen of England have to do with you; you miss her so much; then go with her; I have always liked Carina, but this time I was very surprised and puzzled; a Chinese loves the Queen of England, it is really X; why don’t you post the Queen of England on Weibo, you think we will not bypass internet censorship (of mainland China).”

However, compared with the radical comments on Weibo, Carina’s post on Facebook was supported by many netizens: “I totally support you, why do you need the approval to pay tribute to the deceased?!” “Thank you for speaking up.”

Carina was silent for a few days after the critiques on Weibo and she posted a group of photos of her meal at a small restaurant on Facebook on Sep 14, with the caption saying that it was one of her favorite places to have lunch.

Although it was just a casual meal, Carina dressed up and wore a full body of accessories, with a very high-profile look. She ordered a large portion of fries and grilled chicken skewers, and took a roast chicken leg to her mouth, smiling and looking very relaxed, as if unaffected by the comments on Weibo.