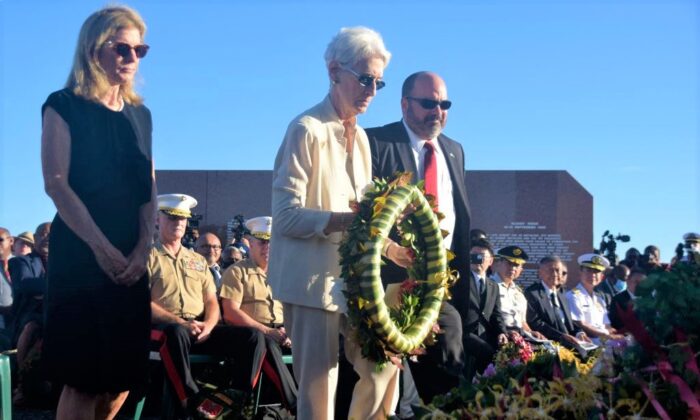 US Deputy Secretary of State Wendy Sherman (C) lays a wreath next to US Ambassador to Australia Caroline Kennedy (L) during a ceremony marking the 80th anniversary of the Battle of Guadalcanal at Skyline Ridge in Honiara on the Solomon Islands on Aug. 7, 2022. (Charley Piringi/AFP via Getty Images)
US News

Dignitaries Commemorate 80th Anniversary of the Pacific Battle of Guadalcanal

Top diplomats have gathered in Honiara, the capital of the Solomon Islands to commemorate the 80th anniversary of the bloody Battle of Guadalcanal (Aug. 7, 1942 to Feb. 9, 1943)—considered a turning point during the Second World War for the Allied forces.

U.S. Ambassador Kennedy thanked the descendants of her father’s rescuers, John F. Kennedy, who was in command of a U.S. Navy patrol boat that was destroyed by a Japanese destroyer on Aug. 1, 1943.

“My family and I owe a personal debt of gratitude to two Solomon Islander Scouts—Biaku Gasa and Eroni Kumana—who saved my father’s life,” she told attendees.

“Thanks to them, he and his crew survived the sinking of PT-109 and (he was) able to return home and eventually run for president. His experiences here made him the man and the leader that he was, just as the experiences of so many others shaped the men and women they would become.”

“I know he was wounded in action here on Guadalcanal, and that eventually his wounds became infected with jungle rot. He became sick enough to be evacuated—first to New Zealand, where he always said the Kiwis took extraordinary care of him, and eventually to California,” she said.

“Like a lot of World War II veterans, he didn’t like to talk much about his service. He didn’t glory in it. He didn’t revel in it. But still, his experience here shaped him. And it shaped me in return.”

On Aug. 7, 1942, the Allied forces began the six-month campaign to retake the island of Guadalcanal, Tulagi, and Gavutu-Tanambogo just months after the significant Battle of Midway. It was also a proving ground for the U.S. Marine Corps amphibious warfare.

The Battle of Guadalcanal saw major engagements across air, sea, and land resulting in 1,600 Allied casualties and 24,000 Japanese deaths.

Sherman Reiterates US Commitment to Pacific

Deputy State Secretary Sherman said that in hindsight, it was easy to recognise that the Battle was a turning point in the Pacific theatre.

“But for the marines patrolling the dense and humid jungle, who had to be wary of both enemy snipers and crippling disease … for the sailors who fought terrifying night battles in the seas around these islands … for the airmen who engaged in countless dogfights in the skies above … the future was unknown and unknowable,” she said.

In an allusion to Moscow and Beijing, Sherman said that with the passage of time, some world leaders had “forgotten the awful lessons learned here, or perhaps never took them to heart.”

“Leaders who believe that the principles and institutions the world set up after the Second World War—the rules-based international order that has enabled peace and prosperity in the Indo-Pacific and around the world for generations—can be ignored and undermined, diminished and destroyed.”

Sherman reiterated the Biden administration’s efforts to engage with the Pacific, including Secretary Antony Blinken’s decision to release the U.S.’s Indo-Pacific Strategy in Fiji earlier this year, and Vice President Kamala Harris’ address to the Pacific Island Forum in July, as well as the announcement of new U.S. embassies in Tonga, Kiribati, and the Solomon Islands.

Meanwhile, Solomon Islands Prime Minister Sogavare has been forced to defend his absence claiming his government was “well represented” at all events marking the anniversary.

He said claims of a diplomatic snub were misleading and lacked an understanding of the “relevant protocols applied and exercised during the events.”

Yet, among Pacific nations, it is common for heads of state to attend and engage with dignitaries below their official rank—namely because many Pacific nations have smaller bureaucracies and governments.

Sherman, who met with Sogavare on the same day, said he had “missed an important opportunity.”

“This was a place where international leaders gathered to say that the work with Solomon Islanders, at the time of World War II, was decisive in victory, in ensuring freedom and democracy. And so I really felt sorry for the prime minister because I think he missed an important opportunity,” she told the Australian Broadcasting Corporation.

Relations between Sogavare and democratic leaders have been on the slide after the prime minister signed off on a contentious security pact with Beijing.

The pact will open the door for the Chinese Communist Party to station troops, weapons, and naval ships in the region.