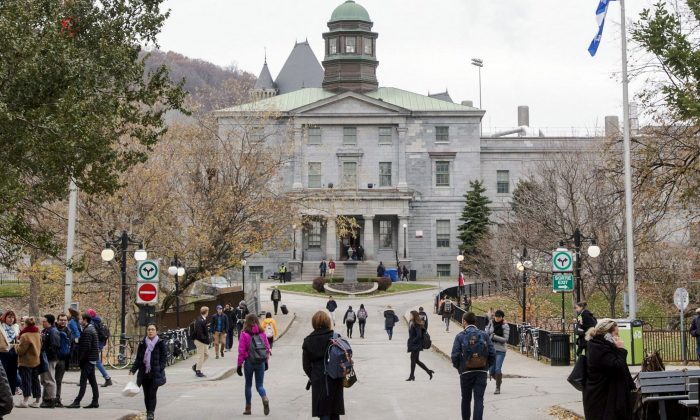 The McGill University campus in Montreal in a file photo. A persistent rise in student debt and associated bankruptcies suggest a higher-education sector that is in disarray, writes Fergus Hodgson. (CANADIAN PRESS/Ryan Remiorz)
Viewpoints

Mounting Student Debt Tells of Universities All at Sea

This summer, the federal government paid employers more than $200 million and up to 100 percent of compensation to get them to hire students. If these young adults are Canada’s best and brightest—enjoying taxpayer-funded education—why are they so unappealing to employers that they have to be discounted to half price or free?

Funding for the Summer Jobs Program has doubled under the Liberal Party, but current university students are not the only ones struggling to be worth the minimum wage. A persistent, long-term rise in student debt and associated bankruptcies suggest graduates undergoing similar challenges and a higher-education sector in disarray.

As economist Bryan Caplan notes in “The Case against Education,” the two primary motives for higher education are human capital and signalling. The inordinate emphasis on ideologically driven majors, rather than hard and soft skills, undermines human-capital formation.

Meanwhile, the incessant drive to get every last soul into university dilutes and, for less selective programs, reverses the signalling value for intelligence, conscientiousness, and respect for authority. To signal distinctive talent, one must achieve ever-higher levels of education and attend more selective programs.

Student debt in Canada contributed to 22,000 insolvencies in 2018, around 10 percent of the total. While far from the devastating crisis in the United States, the upward trend is a warning for action now rather than later. The annual Hoyes Michalos Bankruptcy Study reports a record rate of student-loan-induced insolvencies, and average student debt upon graduation has ballooned 68 percent this decade: from $26,300 in 2010 to $44,200 in 2019.

The average undergraduate tuition fee in 2018/2019 was only $6,838, excluding living expenses. However, even heavily subsidized tuition has almost tripled since 1990 and outpaced inflation every year since 1982. Whereas the average Canadian took 293 hours of minimum-wage work to afford university in 1990, today 505 hours is required.

In some provinces, the ailment is more advanced. For instance, in Ontario the average tuition is $8,838 and has been increasing at a rate of 4.7 percent annually over the past decade. One out of six insolvent Ontarians in 2018 is an indebted student.

The number of Canadians with high debt—more than $25,000—has also ballooned in the past decade. Three years after graduation, almost a quarter of students still owe over $25,000. That burden can affect a whole range of life choices and possibilities, such as delaying buying a car or a home, getting married, and/or having children.

Under the Bankruptcy and Insolvency Act, students can discharge via bankruptcy almost any government-guaranteed debt seven years after graduation. This incentivizes more debt and higher tuition while socializing the costs of non-marketable degrees.

Ill-Suited for the New Economy

Even as tuition has risen, Canadian campuses have in general become more conducive to progressive dogma and activism than learning. Surveys show a sizeable majority of Canadians believe political correctness has gone too far, with universities leading the way.

The Justice Centre for Constitutional Freedoms (JCCF) finds most taxpayer-funded universities fail to protect free speech. The JCCF’s reported trend has been for the worse in recent years. All too often, college campuses are where free speech goes to die.

Research shows that up to half of all jobs created in Canada over the next 10 years will require major skill shifts due to technological advancements. However, non-technical majors such as gender studies are ubiquitous in every province. Mount Allison University in New Brunswick even offers a course in environmental activism—not your best bet for the job market.

A University of Toronto graduate in comparative religions with a minor in Middle Eastern civilizations told Vice he wanted the degree so he could start a cult. It makes one wonder why taxpayers fund this and then bail him out when he fails to put a roof over his head.

Even the Summer Jobs Program has become a tool for ideological manipulation. Under a litmus test imposed by the Liberal Party government since 2018, 400 organizations have become ineligible for the grants due to their violations of progressive views on issues such as abortion, sex education, and family planning.

The Canadian taxpayer cannot keep subsidizing and lending for fields that gobble up precious working years and impede rather than heighten employment opportunities. The short-sighted mantra of higher education as always better is coming apart in Canada and the United States, and it is about time. As many schools fail to remain relevant, a Harvard University professor predicts at least a quarter of U.S. colleges will close their doors in the next two decades.

Further federal funding and meddling would be counterproductive to what is constitutionally a provincial concern. However, there needs to be a major rethink regarding the purpose of higher education in Canada and how it does or does not match what these institutions do. In particular, there needs to be greater competitive pressure across the provinces and more attention given to paying customers and their outcomes.

Such is the institutional inertia and intellectual influence of universities. Lawmakers will have to be thoughtful and creative with how they engage in reform. However, being seemingly entrenched does not make a problem less in need of a solution. The first step to solving a problem is recognizing it. The current trajectory, without a change of course, is for a more indebted population with increasingly irrelevant education.

Fergus Hodgson is the executive editor of Antigua Report, a columnist with The Epoch Times, and a research associate with Frontier Centre for Public Policy.