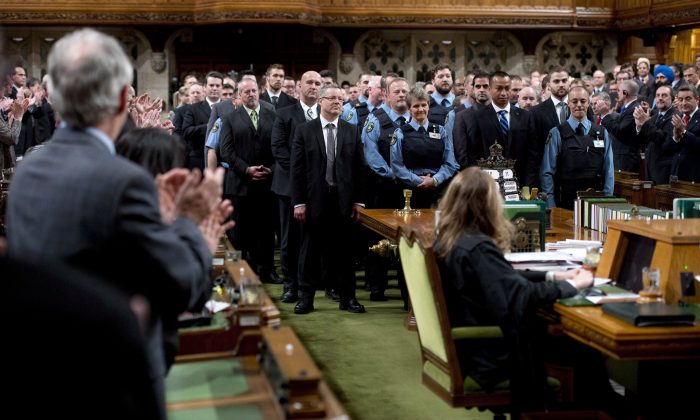 House of Commons security personnel receive a standing ovation on Dec. 11, 2014, from members of Parliament as they are honoured for their efforts during the October shooting on Parliament Hill. RCMP are will soon take control of security inside the Parliament Buildings. (The Canadian Press/Adrian Wyld)
Canada

OTTAWA—Nearly a century of parliamentary tradition is coming to an end with the RCMP poised to take control of security inside the Parliament Buildings.

The Conservative government is giving the Mounties power over what used to be an entirely independent security team patrolling the halls of the House of Commons and Senate, sources familiar with the plan say.

Members of that tight-knit Commons team, led by former sergeant-at-arms Kevin Vickers, were responsible for stopping a gunman’s rampage in the Centre Block last October.

The gunman made it past RCMP officers stationed on Parliament Hill on the morning of Oct. 22; the force has long had control over the parliamentary grounds, but not inside the buildings.

Ongoing reviews of security on the Hill following the attack indicate a need for more unification among security personnel.

The government says the move will make one police force accountable for protecting Parliament.

The government says the move will make one police force accountable for protecting Parliament.

The first step was to eliminate the two separate forces inside the building, one on the Senate side and one on the House of Commons. That happened in November.

The RCMP was also given responsibility for the prime minister’s personal security whenever he was in the building—a move that frustrated current House of Commons guards, who were trained for that job by the RCMP themselves.

Now, the Mounties will take over command of security for all of Parliament Hill, multiple sources say.

The existence of an independent police force inside Parliament Hill dates back to the formation of the RCMP itself in 1920.

At the time, parliamentarians didn’t want members of that force patrolling the Commons so a distinct security services team was created instead. A second one was established for the Senate in case politicians found themselves in conflict with each other.

The distinction between interior and exterior police agencies on the Hill had become so entrenched that for decades, RCMP or local police had to be formally invited to enter what’s known as the parliamentary precinct.

The current team won’t be disbanded but will report to an RCMP boss.

Currently, the House of Commons teams report to the sergeant-at-arms, who is responsible for the security and maintenance of the Parliament Buildings.

But that was destined to change when Vickers was named Canada’s ambassador to Ireland last month. A request for an interview with Vickers was declined.

One government source familiar with the plan, who spoke on condition of anonymity, said the move is intended to make one single police force accountable for security.

The broader aim is to provide the best model of security within the Parliament Buildings, symbols of Canada’s democratic system and therefore targets for extremists, said the source, who wasn’t authorized to discuss the matter publicly.