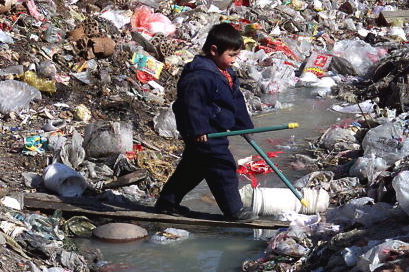 A boy crosses a polluted stream that runs through an open waste refusal area. Piling trash without any infrastructure protection can cause surface and groundwater pollution as well as heavy soil contamination and result in illnesses, including cancer. (Stephen Shaver/AFP/Getty Images)
China

According to a recent survey, Beijing generates 18,400 tons of municipal solid waste daily, which keeps increasing at an annual rate of eight percent. Shanghai’s daily waste volume is as much as 20,000 tons, and Guangzhou produces about 18,000 tons.

China’s overall waste-processing capability is far from enough. Beijing, for example, has a waste disposal capacity of approximately 10,300 tons per day, leaving a daily gap of over 8,000 tons.

The municipal solid waste treatment capacity in 657 Chinese cities was 91.1 percent in 2011, with 20.1 percent of treatment consisting of piling, burial, or open-air incineration. According to estimates by China Association of Environmental Protection Industry, untreated waste for those 657 cities was close to 5 million tons.

Waste piling up is also a problem in the countryside. Current reports by the regime’s Environmental Protection Bureau show that 40,000 counties and close to 600,000 villages are without any environmental protection infrastructure, while creating 280 million tons of waste annually.

Problems are particularly serious in regions where villages border on cities, according to mainland media, as there is disagreement among local authorities as to who is responsible for the waste disposal. Trash therefore piles up in those places.

According to a Southern Weekly report, Yuanfeng Village, Guangdong Province, with a population of only 400, had twelve people die of cancer during the past 10 years, earning it the title “cancer village.”

Shi Hanping, a professor at the First Affiliated Hospital at Sun Yat-sen University said this kind of cancer death rate was “abnormally high.”

A mountain of trash is piled near the village.

Chen Liwen with Nature University told Southern Weekly randomly piling trash without any infrastructure protection allows a mix of waste to leach into the soil. This can cause surface and groundwater pollution as well as heavy soil contamination.

Open-air trash incineration is also a big health hazard. In the suburban areas of Beijing, where waste is incinerated, it often severely affects the air quality in Beijing.

Professor Pan Xiaochuan from the School of Public Health at Beijing University said open-air incineration generally is incomplete combustion. It can create large amounts of dioxins, heavy metals, nitrates, and other toxic emissions. These harmful substances are not only carcinogenic, they also affect children’s brains and nervous systems.