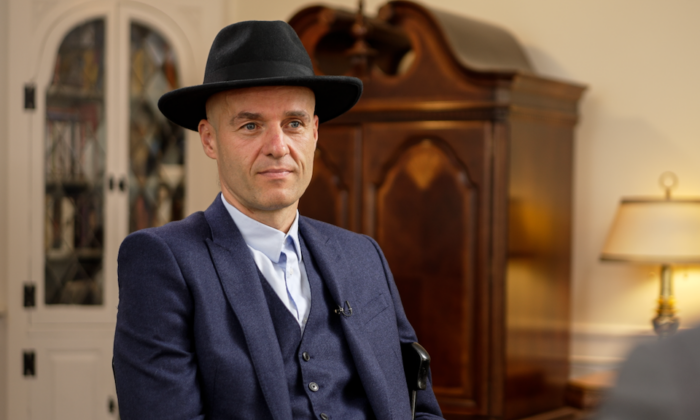 Paul Frijters, a visiting professor of Wellbeing Economics at the London School of Economics and co-author of “The Great Covid Panic: What Happened, Why, and What to Do Next," in Norfolk, Conn., on May 27. (Bao Qiu/The Epoch Times)
WORLD

At the start of the pandemic, professor of Wellbeing Economics at the London School of Economics and co-author of the book “The Great COVID Panic” Paul Frijters saw that governments’ response to COVID-19 did not match the level of lethality of the virus and decided to develop a method to quantify the harm government COVID policies would have on people’s well-being.

Frijters’s analytical models revealed that the harm from policies, including lockdowns, would be colossal compared to any benefits.

“I could calculate what kind of ballpark figure the mental health crisis would look like, and then I lay that out against the best estimates as to what these lockdowns were supposed to do,” Frijters said during a recent interview on the American Thought Leaders program. “And it was like comparing a mountain with a mole heap, and the mountain’s the cost and the mole heap was the benefits in the best state of the world.”

In order to understand this phenomenon, he decided to look into crowd psychology and saw signs of what people do when they are in a panic.

“That’s when I really thought, ‘okay something is amiss,’ and I went into a highly analytical mode of: ‘ok, I’m gonna research this. I’m gonna get to the bottom as to what is going on and what we should do next,'” in March 2020, said Frijters.

With 10 years under his belt as a professor of health economics in Brisbane, he knew how to interpret scientific models and where to find viral immunology studies. He saw that the virus was mainly affecting the elderly and began developing his system to quantify the impact of extreme pandemic policies on people’s well-being.

“And I could apply that to what was coming in terms of the disruption, so I could valuate how many lives are we going to lose in the future because of the enormous crash in the economy that is now being mandated by the various closures.”

Frijters spoke to colleagues who also saw the “madness” of the pandemic mitigation policies and then a broader alliance of like-minded scientists and academics formed; who tried to push back against the overreach of the government, the medical institutions, and show how the vulnerable, weak, and elderly were being disproportionally affected by COVID policies.

Frijters discovered that many areas of well-being were impacted by lockdowns, including the two key areas of education and mental health. The overall quality of life declined for 10 percent of the population on average, said Frijters.

“Roughly speaking, in the UK we found that mental health problems almost doubled, depression rates went from 15 to 30 percent. We find similar things in the U.S., and that is an enormous loss,” said Frijters.

Other areas that impacted well-being were employment and government spending, which lead to inflation.

He said there are two choices to deal with the government debt, one way is that society “can pay back the government debt or it can have hyperinflation, which is roughly what we’re going through now. By so much money printing, we’re basically impoverishing everybody via inflation and disrupting the whole economic system.”

People are in for a hard time entirely due to government policies of the last few years, Frijters said. Adding that food shortages will get worse in the time ahead, due to supply and agricultural disruptions also caused by government policies.

The fifth area of well-being that Frijters saw impacted was people’s overall health, which decreased or caused death due to lack of medical care because the hospital systems were prioritizing COVID.

Frijters and his like-minded academics believe many of these losses could have been avoided if a more balanced approach to the pandemic had been adopted. They supported the view of the Great Barrington Declaration, which called, for “a much more sensible approach to the pandemic” and advocated ending lockdowns to instead, look “after those most vulnerable, let the rest get on with their lives.”

“Lots of doctors got fired for speaking out or for giving their patients sensible information about the risks and benefits of both early treatments and the vaccines. That was suddenly considered misinformation whereas, up until 2020, that was the legal duty of every doctor to do,” said Frijters.

He also noticed that the vast majority of the media outlets were repeating what governments were saying about the lethality of the virus and the reason for government policies but there were only a few “green shoots of reason” revealing the harm of these policies.

Because countries are connected via social media, the panic was able to spread, “and then mainstream media channels, first in China and East Asia, and then Europe and the U.S. and Latin America; all the politicians fell in line, because they thought … that they thought that if they didn’t they’d be pushed aside,” said Frijters.

Many elites, including politicians, took advantage of the fear to gain financially and to consolidate their power, “and so we’ve seen that kind of free for all, whereby there’s been lots and lots of opportunity grabbing by thousands of people all over the world.”

Countries have allowed their government institutions to expand and now it is time to “deal with the reality that we’re an opportunistic species, and we’ve got to set up our institutions such that that opportunism doesn’t destroy us all.

“I don’t see evil people, I see opportunistic people; and humans are all a little bit opportunistic, and they were in the fortunate or unfortunate position to be able to grab more power in particular ways and they went for it. And I hate to say it, most of us would have done the same,” said Frijters.

“So I tend to blame the system. And I tend to look for systemic solutions, rather than saying these are evil people, we need to get rid of them or replace them with others, because I always believe the others will be the same in the same circumstances.”

Frijters believes the American founders had the right idea, with the system of governance they created. “They were afraid that anyone among them would be the king and so they wanted the system in which no one needed to be trusted.”

Frijters said the bureaucracy in the medical field has increased over the last 30 years, with power being consolidated at the top. “And a huge amount of regulation, that’s even worse in countries outside of the U.S., and so [doctors] had already been reduced to puppets to a certain degree.”

It’s also true that “bureaucracies, including in private companies, have just been growing more and more centralization. So this is not just true of government, it’s also true of large corporations.”

He said to ensure these types of destructive policies cannot be implemented again, power at these institutions and companies should be decentralized because right now too few people have much too much power.

People are becoming aware of this problem, at least in the United States, Frijters said.

“These American revolutionaries were merchants and some were slave owners and they knew full well the darkness of the human soul or at least what it’s capable of. So they didn’t expect anything different. They didn’t want their institutions to be based on good people who do good things,” said Frijters.