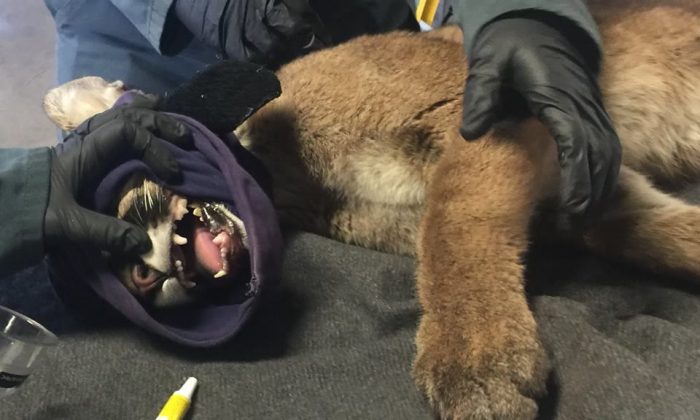 A mountain lion cub that was found in Santa Paula, California on Dec. 22, 2017, is being treated for burns on its paws with tilapia skin. (California Department of Fish and Wildlife)
US News

A young mountain lion that was found wandering in Ventura County, California, late last month with burned paws is getting treatment—with fish skin.

The young cub, estimated to be about five months old, was spotted by residents in Santa Paula on Dec. 22. They reported it to the Santa Paula Police Department, and with the help of officers from the California Department of Fish and Wildlife (CDFW), were able to tranquilize it with a blow dart.

Upon examination, the cub was found to be a male and weighed less than 60 pounds, the City of Santa Paula said on its Facebook page.

The cub, which had gotten separated from its mother, was burned in the now-historic Thomas Fire, the California Fish and Wildlife said.

The cub was taken to the CDFW’s Wildlife Investigations Lab in Rancho Cordova for treatment, and, a week later, the cub “is doing remarkably well,” the department said.

Veterinarians have covered all four pads of his feet with sterilized tilapia skin, a method that has been used successfully on humans to heal burn wounds. The tilapia skin contains collagen, which helps the burns to heal.

The only problem? His caretakers expect the cub to try to eat his bandages at some point.

Because the young cub was separated from its mother, it would likely have died in the wild. After treatment, it will remain in captivity, the CDFW says.