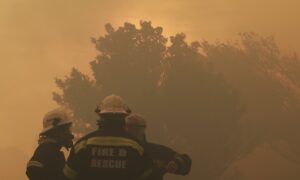 Mountain Gorillas Come Back From Brink of Extinction, More Than 1,000 Left Now

Mountain gorillas have come back from the edge of extinction, and now more than 1,000 specimens are thriving in central Africa—the first time in a decade.

The International Union for Conservation of Nature (IUCN) updated mountain gorillas’ status from “critically endangered” to “endangered,” according to The Associated Press in a Nov. 15 report. A decade ago, there were an estimated 680 mountain gorillas.

“In the context of crashing populations of wildlife around the world, this is a remarkable conservation success,” said Tara Stoinski, the chief scientist of the Dian Fossey Gorilla Fund, in the AP report. “This is a beacon of hope—and it’s happened in recently war-torn and still very poor countries,” she added.

The subspecies of gorilla is found in areas of the Democratic Republic of Congo, Rwanda, and Uganda. There was speculation that the primates would be extinct by the year 2000.

Some experts say, however, that the numbers could still go down quickly.

“We have made progress in terms of their protection, in terms of allowing an environment where mountain gorillas can continue to thrive and grow,” Anna Behm Masozera, director of the International Gorilla Conservation Program, told AP. “But it’s important to note that mountain gorillas’ numbers could still slip back very quickly. We still have just two fragile and small populations.”

“This is progress, not victory,” Chris Tyler-Smith, a geneticist with the Wellcome Sanger Institute, told Mongabay. “The current level of conservation effort definitely needs to be continued.”