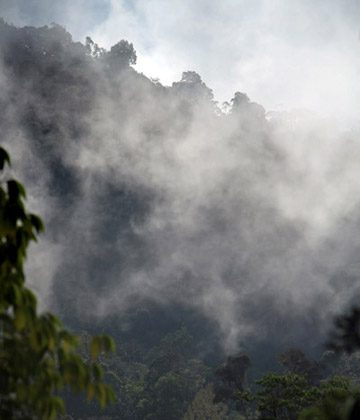 It’s not easy to measure carbon in mountain forest ecosystems. For one thing, climbing into these forests can be difficult, exhausting, and even treacherous. For another, many mountain rainforests are almost constantly blanketed by clouds—hence the term “cloud forest”—making it problematic to measure above-ground carbon storage from the air or satellite. But a new review study in Biogeosciences found that many estimates of carbon storage in montane tropical forests have been largely underestimated.

Looking at over 90 studies of above-ground carbon in mountain forests, Spracklen and co-author Renton Righelato with the University of Reading, found that the angle of the forest’s slope has led to many erroneous carbon storage estimates.

In fact, the scientists found that 75 percent of tropical forests on mountain sides rested on steep slopes, meaning that carbon storage in these ecosystems is 40 percent more than usually calculated worldwide.

Still, above-ground carbon in tropical montane forests remains less than in lowland rainforests by land area, but not by too much.

“We found that the difference is less than you might expect. In the Andes, mountain forests store only about 20 percent less above-ground carbon per land-surface area than lowland forests,” said Spracklen adding, “We don’t yet know the reason behind the differences. Some researchers are probing into how carbon fluxes change along altitude gradients, and these studies promise to tell us more about how and why changes occur.”

Moreover, the current research only looked at above-ground biomass and not the carbon sequestered in the soil. Spracklen says this area “needs more research.” In addition, studies of above-ground carbon in tropical montane forests have largely focused on the Andes with few studies in Africa or Asia. But still, the results show montane forests are likely a much more important carbon sink than expected.

“Hopefully our study will inspire forest carbon projects in the mountains,” Spracklen noted.

Forest cleared around hill for cattle ranching in Colombia. More-and-more montane forests are facing clearing. Photo by: Rhett A. Butler.