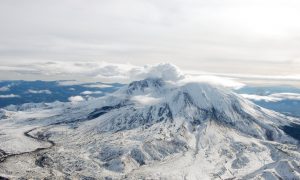 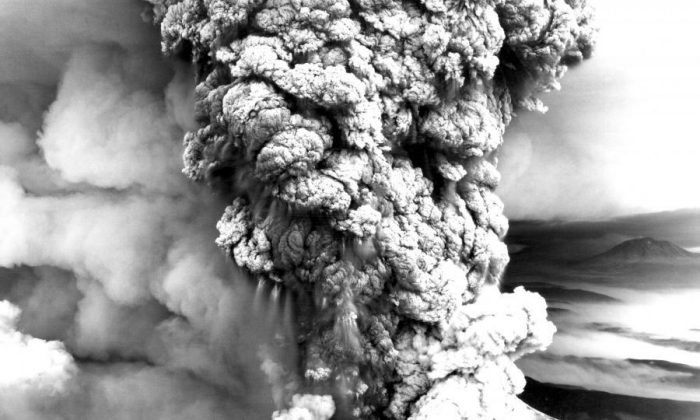 Ash column from the eruption of Mount St. Helens on May 18, 1980 from the southwest. Mount Adams is in the background. (USGS)
Environment

The violent eruption of Mount St. Helens on May 18, 1980 was not a one day event. For two months magma had been accumulating below the volcano, creating a huge ominous bulge on the mountain’s north slope, and generating thousands of small earthquakes.

On March 27, steam blasted through the volcano’s summit ice cap, creating a crater over 200 feet wide, covering the snow on the southeast side with dark ash. Within a week, the crater had grown to twice the size and two giant cracks emerged across the summit.

In March, eruptions were occurring approximately once per hour, then slowed to once per day by April 22, and then the activity subsided.

But on May 7, the eruptions resumed again, shaking the volcano and the bulge expanded at a rate of 6.5 feet (2 m) per day.

Then, on May 18, at 8:32 a.m. local time, with no immediate precursor, a series of cataclysmic events began.

First came the earthquake, then the bulge and summit slid away in the largest debris avalanche in recorded history.

The landslide removed the part of the cryptodome, a very hot, highly pressurized body of magma inside the volcano. The removal of the cryptodome triggered powerful eruptions that unexpectedly, blasted laterally through the side of the mountain, sending a wave of fire-hot debris sliding down, overtaking the avalanche debris. The eruption removed nearly 1,000 feet (300 m) of the cone.

A few minutes later, the plume of ash rose up to the sky, reaching a height of 15 miles (24 km) within 15 minutes. For nine hours ash continued to spew, with the eruption reaching its peak between 3:00 and 5:00 p.m.

Winds carried 520 million tons of ash east across the country, covering Spokane, Washington in complete darkness, and reaching as far as as the Great Plains of the Central United States, over 930 miles (1,500 km) away.

Within 15 days, the ash cloud has circled the entire Earth.