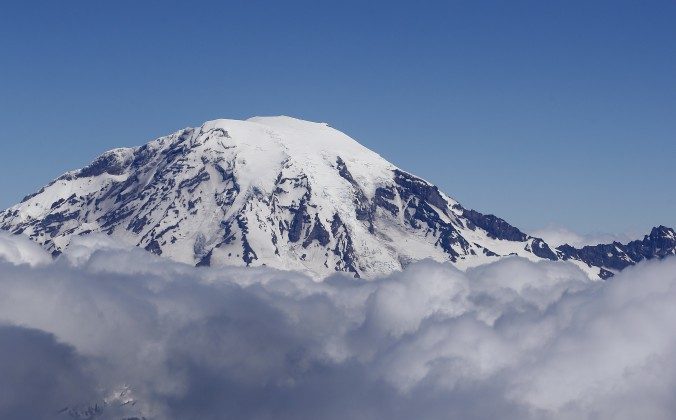 Mount Rainier in a file photo. (AP Photo/Elaine Thompson)
US

Previous eruptions and potential future eruptions of the Mount Rainier were discussed in a recent article about the present activity of volcanoes in Iceland.

Besides Yellowstone’s volcano and Washington’s Mount St. Helens, the Mount Rainier volcano may be the most prominent volcano in the United States.

The article from the Oregonian quoted U.S. Geological Survey scientists David Sherrod, who referred to a word that Icelanders use a lot: “jökulhlaup.”

“It means something along the lines of ‘glacier-fleeing,’ and the need to flee relates to one of the dangers folks living on the island face from their volcanoes: mudflows,” the article said.

“When 2,000-degree Fahrenheit magma hits ice, the results ‘can be catastrophic’ and explosive, Sherrod said. (If you’ve ever tossed an ice cube into a boiling hot beverage to cool it down, you have an idea of how violently ice and hot substances can react when combined.) In Iceland, where volcanoes lie under or are surrounded by a whole lot of ice, that fire-and-ice combo can generate extensive amounts of meltwater and floods of mud that threaten residents.”

A sketch of Rainier erupting. (NPS)

While most volcanoes in the United States don’t have nearly as much ice as the ones in Iceland do, an exception is Mount Rainier, which raises concerns about the type of flow seen in Iceland.

“Mudflows from a Mount Rainier eruption could reach as far as Puget Sound, Sherrod said,” the article noted.

“Cascadia volcanoes are capable of making life very unpleasant for everyone in the Northwest when they get a mind to,” Sherrod said.

Researchers recently took focus of Mount Rainier, with teams from across America and Norway using new technology to try to predict when the next eruption will take place.

Mount Rainier is the tallest volcano in the United States with a summit elevation of 14,411 feet.

The most recent recorded eruption at Rainier was between 1820 and 1854, but some eyewitnesses reported eruptions as recent as 1894, according to author Stephen Harris (Mount Rainier: America’s Most Dangerous Volcano). The last major eruption was about 1,000 years ago.