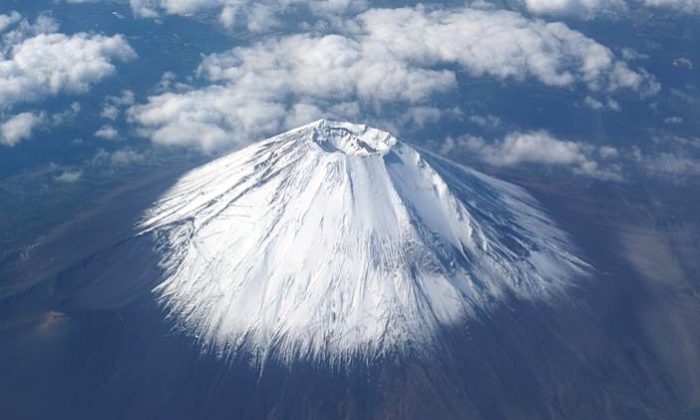 The March 2011 earthquake that sparked the tsunami that killed thousands in Japan has had another impact that could turn deadly. The quake caused pressure to build up under Mount Fuji.

The active volcano hasn’t erupted since 1707 but scientists say that the pressure build-up could cause it to erupt, describing its condition as a “critical state.” The last eruption happened 49 days after a violent 8.7 magnitude earthquake in the region.

French scientists at the Institute of Earth Sciences in Grenoble teamed up with Japanese scientists in studying 800 seismic sensors that recorded data after the earthquake.

Mount Fuji stands at the junction between the Pacific, Eurasian, and Philippine tectonic plates.

“Our work does not say that the volcano will start erupting, but it does show that it’s in a critical state,” Florent Breguier, a researcher at the institute, told the Guardian.

The scientists carried out a giant echo-scan of the bowels of the Earth, based on the data gathered. They focused on signals known as seismic noise, the result of interaction between ocean swell and background interference.

Using the recordings, they were able to map the geological disturbances in the bedrock caused by the seismic waves that followed the 2011 quake, which measured 9.0 magnitude.

“Seismic waves travel a very long way, going round the world several times,” Brenguier explained. “Their movement makes the Earth’s crust vibrate, and rather like a shock wave this produces breaks or cracks in the rock.”

The disturbances were actually greater in volcanic regions than near the epicenter of the quake despite distance.

“The volcanic regions are the ones where the fluids trapped in the rock – boiling water, gas, liquid magma, which cause an eruption when they rise to the surface – exert the greatest pressure. The seismic waves add to this pressure, causing even more disturbance,” Brenguier said.

However, the scientists say that no eruption appears imminent.

“We cannot establish a direct relation of cause and effect between quakes and volcanic eruptions, even if statistically the former lead to an increase in the latter,” Brenguier said. “All we can say is that Mount Fuji is now in a state of pressure, which means it displays a high potential for eruption. The risk is clearly higher.”

If an eruption does appear likely to happen, the Japanese government instituted a new plan earlier this year that would have 1.2 million people evacuated.

The first comprehensive evacuation plan for Shizuoka, Yamanashi, and Kanagawa includes a joint evacuation drill scheduled for this fall, reported the Japan Times.

In areas near the volcano near these regions, the wooden houses are at risk of being crushed under volcanic ash.